A Letter to the Conservative Movement

Question: I’ve noticed that a lot of the younger Jews that I meet are uncomfortable identifying themselves as Orthodox, Conservative, or Reform. Why is this?
– Kira, Tuscon

Answer: A lot of people have been trying to answer this question, Kira. In today’s Jewish landscape, many people are deciding not to affiliate Jewishly at all, for all manner of reasons, and there are also some people who are very Jewishly involved, but decline to join a synagogue and affiliate with a movement.

Instead, these people often choose to become part of independent minyanim–prayer communities without all the trappings of a synagogue. Typically, these minyanim don’t have a rabbi, a religious school, or a building, but they do have spirited prayer services. Called independent because they don’t associate with any of the major denominations of Judaism, these communities are especially popular with the younger crowd that you’re talking about. In 2009 there were more than 60 independent minyanim meeting across America, and researchers have estimated that twenty thousand people attend independent minyanim in any given year.

I asked Rabbi Elie Kaunfer, co-founder of Kehilat Hadar, an independent and egalitarian minyan, and executive director of Mechon Hadar, what he thinks about this trend toward non-affiliation. In his book, Empowered Judaism, he argues that it is a positive development for Jewish life: “When people care enough to stake out their own nuanced, complex relationship to Judaism, and reject broad labels in the process, they demonstrate that being Jewish matters deeply to them.”

Rabbi Kaunfer (who was ordained by the Conservative Movement) also critiqued the major movements for being “overly broad” and trying to “serve a mass market.”

Chanel Dubofsky, a writer living in New York, illustrated Kaunfer’s last point when I asked her about her personal choice not to affiliate with a specific denomination:  “As a person who identifies with very left wing politics, I can’t find a Jewish space that supports that part of myself, and I can’t find a left wing space that supports my Jewish self…I’d rather just be Jewish in the ways that feel genuine to me.” Chanel decided to avoid the movements for political reasons, but plenty of people have made similar decisions because of other personal preferences: halakhic, spiritual, social, etc.

What do leaders of the major movements have to say about this trend? I asked Arnold Eisen, the Chancellor of the Jewish Theological Seminary, which is affiliated with the Conservative Movement, if he had any thoughts on why this shift away from denominationalism was happening. In an email to me, he emphasized some of the Conservative tendencies of these non-denominational communities: “It is striking that many of our most committed young people choose to daven (pray) in non-denominational prayer groups characterized by traditional egalitarian services: exactly the Conservative model, not Reform and not Orthodox. Many of these groups are led and populated by graduates of USY, Ramah, JTS [all Conservative institutions]. I do not see this as a failure of the [Conservative] movement. Quite the contrary–just as it is not a failure when Reform services add Hebrew and traditional ritual that makes them more closely resemble Conservative services, or modern Orthodox Jews make the halakhic change necessary to ordain women as rabbis or quasi-rabbis.”

Unsurprisingly, Chancellor Eisen’s response is heavily focused on his own movement. It’s interesting, though, that he views the Conservative tendencies of these unaffiliated communities to be a triumph for the Conservative movement–not a rejection.

Ultimately, Chancellor Eisen wrote, the vibrancy of independent minyanim should compel the major movements to “do their job better, more creatively, reaching out to more Jews with more energy, rather than cease to exist.”

Of course, independent minyanim are not the only reason that younger people are choosing not to identify with the Orthodox, Conservative, or Reform movements. But the growing phenomenon of empowered, non-denominational communities is certainly a significant factor that provides people with new options.

Rabbi Elie Kaunfer is the author of Empowered Judaism: What Independent Minyanim Can Teach Us about Building Vibrant Jewish Communities. ... 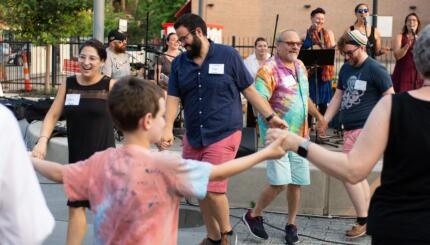 These organized Jewish communities exist outside the major movements.

Why I Love Conferences (or, the end of day one)

I’ve been in panels all day — four, including my own. And one lunchtime meeting that was really interesting (it ...