Ask the Expert: Meat and Fish

Question: Did women in shtetls in Eastern Europe have two separate sets of dishes (dairy and meat) for Passover and another two for the rest of the year?
Leo, Boston

Answer: I know where you’re coming from, Leo. Outside of images from movies like Fiddler on the Roof and Yentl, it can be hard to picture what life was like in the shtetls where many of our ancestors lived before the Holocaust. But we know, or have heard, that shtetls were places of abject poverty, and it seems unlikely that families that could hardly make ends meet would own two, or even four sets of dishes.

To get to the bottom of this issue I consulted with Professor David Kraemer, the Joseph J. and Dora Abbell Librarian and professor of Talmud and Rabbinics at The Jewish Theological Seminary. Prof. Kraemer wrote Jewish Eating and Identity Through the Ages, and is a scholar of the evolution of Jewish eating practices through the centuries.

When I asked Prof. Kraemer about the history of two sets of dishes in the home, he reminded me that I was making assumptions about what “sets of dishes” means. The kinds of utensils we use for eating have changed over time, so while now we may be accustomed to having dinner plates, salad plates, bowls, mugs, glasses, plus a knife, a fork, and a spoon at minimum, this wouldn’t necessarily have been the norm in earlier eras. “In order to have separate dishes, you need to have dishes in the first place,” Kraemer said. For hundreds of years, Jews ate from large bowls and platters shared by the whole family, instead of individual plates. This necessitated far fewer objects in the kitchen, and meant that having duplicates of everything for meat and milk was less of a hassle. This lasted until about the 17th century, when eating technologies began to evolve towards individual portions and plates.

According to Prof. Kraemer, by the time shtetl life was in its heyday, in the 18th-19th centuries, personal flatplates, spoons, knives, and often forks had become the convention, much like what we have today. In observant Jewish communities (both shtetls and urban communities) the norm was to have two sets of dishes, one for meat, and one for dairy.

Among the very poor, the transition to personal flatplates and utensils was slightly slower, but even the most destitute eventually would have had two different sets of dishes, albeit with a very limited number of dishes and utensils in each set. As for Passover, having vessels and utensils set aside exclusively for Passover use had become essential as early as rabbinic times (1st-2nd century CE), but depending on what one’s normal dishes were made out of, it was sometimes possible to kasher one’s normal meat and dairy dishes for Passover.

Today, some people use glass dishes for both meat and dairy, but Prof. Kraemer tells me this would have been significantly less common in shtetls, because glasses dishes were rarer, and more expensive.

If you were looking for an excuse to winnow your kitchen supplies down to just one set based on what your Bubbe’s Bubbe did, it looks like you’re out of luck. But there might be a lesson in kitchen minimalism here. See if you can pare down your kitchen needs to the bare essentials, and then it won’t seem so frustrating even if you have to have two of everything. And if you’re really set on having just one set of dishes, consider going milchigatarian! 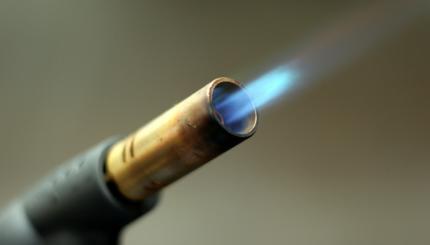 How Do You Mark Your Passover Kitchen?

Until last year, my mother did the bulk of the Passover preparations in our family, which of course included tons ...