The Routine vs. The Novel

Toward the end of Parashat Tetzaveh, we learn that there are two altars, one for the animal sacrifices, the “korbanot” and one for burning the incense, the “ketoret.” The design of this second altar is explicated in great detail, but the purpose of the incense is unclear. The altar is, however, to be used exclusively for incense. Only on Yom Kippur is the blood of animals to be sacrificed upon it. The only thing we know is that the aromatic incense is to be burned before the lamps of the menorah are prepared.

1. What does the “ketoret” symbolize?

2. Why is it connected to preparing the lamps on the menorah?

From Midrash Tadsheh Chapter 11 (taken from Rabbi Menachem Kasher’s monumental 45-volume anthology, “Torah Shelemah“): There were two altars in the sanctuary, one of gold, which symbolized the human life force, and one of copper, which symbolized the body. Just as gold is more precious than copper, so too, the life force is more precious than the body. Yet, each day it was decreed that both always be rendered before the Holy One.

So too, one must always come before the Master of Many Worlds — always with the life force and the body. The copper altar is for sacrifices that are to be eaten — eating is a bodily function. Only incense, something that was made to be smelled, was allowed on the golden altar — and only the soul gets pleasure from fragrance.

The verse in Proverbs teaches, “A mitzvah is the lamp and the Torah is the light…” (Proverbs 6:23). The most heavenly sense is the sense of smell and the midrash of the Tanchuma connects this feeling with four heavenly qualities, holiness, purity, mercy and hope. Each of these qualities brings transcendence and meaning to the banalities of everyday life.

Each day Aaron’s morning began with the reminder that existing is not enough, but each day must include kedusha (holiness), a commitment to our sacred mission; tahara (purity), a commitment to the cleansing of the spirit; rachamim (compassion), a predilection to be generous of spirit; and tikva (hope), a renunciation of despair replaced by a vision of hope. The incense reminds us that this heavenly smoke is meant to light up our souls. 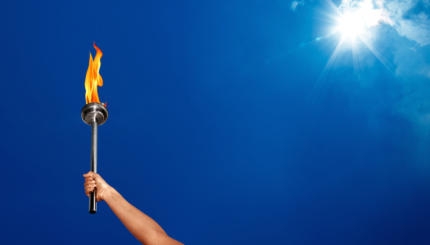 Like the priests and Levites, we must find our unique eternal flame to light the world.