There is one custom which we would expect to find on Hanukkah that is missing–the reading of a scroll in public. After all, on Purim we read the Scroll of Esther every year in order to publicize the miracle. Why don’t we read a scroll on Hanukkah in order to publicize the miracles which God wrought for our ancestors in the days of Matityahu [the priest central to the Hanukkah story] and his sons [the Maccabees]?

The result is that most Jews only know the legend about the miracle of the cruse of oil (Shabbat 21b) and not about the actual military victories of the Maccabees.

The answer is that, in truth, there is such a scroll that was read in private or in public between the ninth and 20th centuries. It is called “The Scroll of Antiochus” and many other names, and it was written in Aramaic during the Talmudic period and subsequently translated into Hebrew, Arabic, and other languages. The book describes the Maccabean victories on the basis of a few stories from the Books of the Maccabees and Shabbat 21b, with the addition of a number of legends without any historic basis whatsoever.

Furthermore, we know that this scroll was read in public at different times and places. Rabbi Isaiah of Trani (Italy, ca. 1200-1260) says that “in a place where they are accustomed to read Megillat Antiochus [The Scroll of Antiochus] on Hanukkah, it is not proper to recite the blessings [for reading a scroll] because it is not required at all.”

In Mahzor Kaffa, which was published in the Crimea in 1735, the Scroll of Antiochus is printed in Hebrew and preceded by the following instructions:

Rabbi Yahya ben Yosef Zalih, who was the leading rabbi in San’a, Yemen, ca. 1715, says “that some read Megillat Antiochus on Shabbat [of Hanukkah] after the haftarah [reading from the Prophets]. This is not required; it is only a general mitzvah to publicize the miracle among the Jewish people.”

But Rabbi Amram Zabban of G’ardaya in the Sahara Desert viewed this reading as a requirement. In his Sefer Hasdey Avot, published in 1926, he states:

Megillat Antiochus according to the custom of the holy city of G’ardaya, may God protect her. The cantor should read it in public in the synagogue after the Torah reading on the Shabbat during Hanukkah. And he reads it in Arabic translation so that the entire congregation should understand [in order to] publicize the miracle which was done to our holy ancestors, may their merit protect us…translated from the Hebrew from Siddur Bet Oved of R. Yehudah Shmuel Ashkenazi [Livorno, 1853].

This is a fascinating passage. Rabbi Zabban translated Megillat Antiouchus from Hebrew into Arabic in 1926 so that the entire congregation would understand it. He seems unaware that Arabic translations already existed. He also presents this custom as a required activity, despite the fact that he seems to have made it up! Perhaps he had heard that this was an accepted custom in other communities and wished to imitate them.

The Jews of Kurdistan, on the other hand, used to read the Scroll of Antiochus at home during Hanukkah. Rabbi Yosef Kafah (1917-2000) reports that his grandfather Rabbi Yihye Kafah (1850-1932) used to teach it to his pupils in Yemen in the Aramaic original along with the Arabic translation of Rav Sa’adya Gaon.

A Scroll for Today

It would seem that there is no point in reviving the specific custom of reading the Scroll of Antiochus in public, because that work is legendary in nature and not a reliable source for the events of Hanukkah. But we do possess such a source for those events–the First Book of Maccabees, which was written in Hebrew in the Land of Israel by an eyewitness to the events described therein.

Therefore, we should thank Rabbi Arthur Chiel who published the First Book of Maccabees, Chapters 1-4, as a separate booklet over 20 years ago under the title “The Scroll of Hanukkah.” It is intended for reading in public or in private during the holiday. We should adopt this beautiful custom and begin to read those chapters in public every year on the Shabbat of Hanukkah after the Haftarah. By so doing, we will be reviving the custom of reading a “scroll” on Hanukkah but, more importantly, we will thereby disseminate the oldest surviving account of the “miracles and triumphs” which God performed for the Jewish People “in those days at this season.”

Excerpted with permission from the website of the Schechter Institute of Jewish Studies.

A holiday influenced by secular society 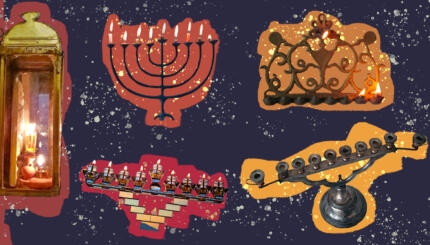