Keeping Up With Our Digital Children: Behind the Screens

What’s Southern and Jewish About Advice?

The following are excerpts from an online conversation entitled “Jews in the Digital Shtetl” with Rabbi Juan Mejía, the Southwest regional director at Be’chol Lashon. The conversation was organized by Judaism Unbound and the Oshman Family JCC in Palo Alto, CA. You can watch video of the full conversation here.

When I started working as a virtual rabbi over a decade ago ago, the Internet wasn’t the behemoth it is today. There was no Facebook. There was no YouTube. People were hanging around in online forums and Yahoo groups, asking questions about Jewish beliefs and customs. At the time I was a rabbinical student with a clear project: I wanted to help people who found themselves in the same situation that I did.

I had discovered my Jewish roots after having grown up Catholic in Colombia, and spent many years sifting in isolation through the meager Jewish books that I happened to stumble upon since the internet was in its infancy. Many years later, when I entered the rabbinate, I decided that my rabbinic mission would be to make Jewish content available in Spanish for people like me. The only place that could give me the coverage that I needed was the internet. It was the only place that could be everywhere at once and also the place where the seekers were looking for content to feed their Jewish curiosity.

During the first years of my career, there was a stigma associated with being a “virtual rabbi.” I would hear: “Oh, you teach on the internet? That’s for frauds and hacks.” Not long ago rabbinical schools and seminaries and places of higher Jewish learning would say, “We don’t do online learning because it’s not high quality. It’s uncontrolled. Anyone can post things online ”

In the beginning, I was skeptical, too. I used the Internet to teach out of necessity, since I couldn’t be everywhere at once. But in the past couple of years, there’s been this tectonic shift and increase in quality. Every American rabbinical school that is open and functioning is now holding classes online. And the coming weeks or months of isolation due to the spread of the coronavirus are going to further change the way we “do Jewish.” There won’t be a stigma associated with being a “virtual rabbi” anymore. In fact, every rabbi is going to have to be a “virtual rabbi.” We are going to have to serve people very differently. This will be challenging, but it will also present us with an opportunity to serve people who were not being served before.

Initially I focused on serving the descendants of those forcibly converted during the Spanish Inquisition like me—often referred to as anusim or conversos—because I felt like I had this very big emotional responsibility to my ancestors. But then I realized that this project was bigger than just the people with the right genetics or family histories. The material I was posting online was resonating with people from many backgrounds who were seeking a new spiritual path, and it was causing them to want to open themselves to Jewish experiences and even become Jewish. The material that I had deposited for a specific niche in the internet had reached beyond the borders of its original recipients and now was creating its own demand. Many Jews and Jew-curious people who were gravitating towards my materials found common interests, cemented friendships, and, where geography allowed, even went on to create brick and mortar communities out of their virtual experiences.

We are currently seeing how the brick and mortar institutional Jewish world is turning to the internet to solve a particular problem. But if my experience serves as a paradigm, this Jewish content that is being poured on the web will in turn ripple and create a more expansive, open, and inclusive community around it. The massive spike of this temporary virtualization of the Jewish world will fundamentally alter the nature of our Jewish engagement, and its ripples will reshape not only how we do Jewish online, but also in real life.

Here are some pointers on how Jewish professionals and institutions might harness the internet to maximize their impact in the strange new world that this crisis will forge:

Face to face is key, even if it is online.

There are two levels of my work: educational and pastoral. On the educational level, my best advice is to be consistent. Instead of bombarding members of your community with a bazillion posts, choose a date and time when people know they can find you, like Thursdays from 6-7PM. The old TV model—when you know your show is going to be on—works! People want to know when the rabbi is around. In some cases, you might be the first rabbi someone will have the opportunity to speak to. I’m not changing their lives; I’m simply making myself available to people, via video conference, which has a certain level of intimacy.

Additionally, it’s important to find out what it is that the members of your community want to learn. Is it a conversion class? Bible? Hebrew? Topics of interest having to do with contemporary Israel? Find out what your community needs. Chances are that other people around the world need it, and they will find it if you make it available.

As for my pastoral work, I do all of it on the free messaging app WhatsApp. I get 80-100 questions and prayer requests every day on WhatsApp. Now, I don’t type that fast with my thumbs, but the beautiful thing about WhatsApp is that there’s a feature that allows you to send audio messages. When people hear my voice, it’s more personal. We’re one step away from being face to face. Using WhatsApp, I realized the possibility for true long-distance spiritual connection, mentorship, and direction.

Consider what it would look like to teach Torah intentionally for everyone.

For years, most of the work that was being done virtually was being done accidentally. Rabbis were writing blog posts and making videos for their congregations, and people in Latin America, for example, would stumble upon the material and share it with others. What I have been seeing recently from younger rabbis, especially, is they are thinking about the issue of intentionality. What happens if I start making videos that are not designed solely for my suburban synagogue but rather for everyone?

Whenever our product—call it Torah, call it Judaism—has aligned itself with information technology, there has been a widening of the definition of community. This happened when the Bible was translated to Greek and when the printing press was invented and Jewish texts were disseminated widely. All around, people fell in love with Judaism once they had access to our product. This wisdom reached the four corners of the world, but we could not actively welcome everyone into our community—until now. As our communities explore with new forms of communication and being IN community, we have to be aware that new people (Jewish and not-Jewish) will find the open doors of our virtual spaces and be inspired by our message. We have to start thinking how to retain and foster these newcomers once the crisis passes.

Our digital shtetls need not be insular.

I really love the image of the digital shtetl. (Shtetls were the small, rural Jewish communities of Eastern Europe.) Because of politics and generational shifts, more and more we are all living in shtetls, whether it’s the people we work with, our families, or our interest groups. People want more boutique, smaller communities. We’re all living in shtetls now. But the beauty of the digital shtetls is that they do not need to be insular or isolated. Because of the nature of our connection all of these shtetls are talking to each other, cross-pollinating and sharing people and ideas.

As we’re living through this pandemic, what we should keep in mind is that when we put things online—when we digitize the shtetl—we’re opening ourselves to new people, whether they’re Jewish or not. Ideas and people are starting to flow more freely. Out of necessity, we found a way in which millennials and Gen X’ers and Baby Boomers, Jews, Jew-curious and non-Jews can all share the same Jewish experiences.

Right now, we’re isolated, we’re fleeing the plague, and we’re creating these online communities of strange and scared bedfellows. In a month or two months, after we survive this, we may start getting messages from people asking how they can be a part of what we’re doing. I’m not going to make a decision about whether that person is Jewish or not. If people are living according to our values and they’re in relationship with us, it’s good for us, it’s good for them, and it’s good for the world. 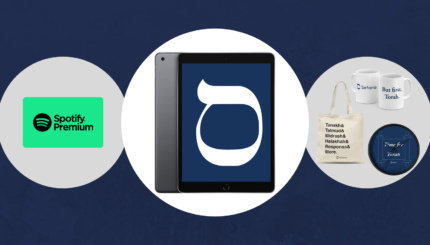 Enter to win one of these prizes. 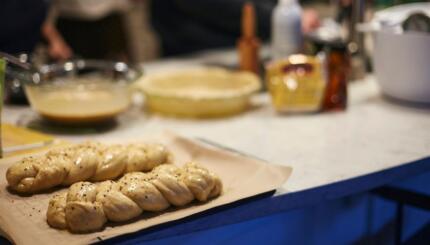 5 Jewish Cooking Classes You Can Take In Your Own Kitchen

Learn to make anything from a classic babka to Vietnamese pho.

The following is the first in a three-part series on how to help safely navigate the world of social media ...