It was a Sunday, near the end of class in the 5th Grade classroom at Temple Israel in Tallahassee, Florida. The discussion turned to how many figures in the Bible lived to be incredibly old. Moses, as I told the students, is recorded to have lived to 120. Sarah, Abraham’s wife, is listed as living for 127 years. (“And Sarah was one hundred and seven and twenty years old: these were the years of the life of Sarah” Genesis 23:1), and Abraham outlived her by almost 50 years, dying at 175 years old. These are but a few of the many Biblical figures who were recorded as living extraordinarily long lives.

Many students were skeptical.

Could they really have been that old? People don’t live long today, and we know that life spans were shorter in ancient times. What could the text possibly be telling us?

The most common theory the 5th graders came up with was that a “year” in Biblical times was not calculated on the same basis as it is today; a Biblical year was probably a shorter period, thereby accounting for the extra-long lives.

Then a student, Asher, raised his hand.

I called on him, and he said something that I have never forgotten.

“Maybe it just seemed like they lived that long,” he said, “because our ancestors lived such good lives, and did so many wonderful things in their life.”

Discussion stopped; quiet fell over the room. I looked at Asher, silently absorbing the wisdom and beauty of that sentence and letting his words sink in with the rest of the class.

I have been teaching the 5th Grade in a synagogue setting for almost twenty years, and thought I had heard just about everything a 5th grader could dish up – funny, offbeat, thoughtful. But never had I heard anything as insightful or poignant as Asher’s comment. His response made me think: Maybe we are all capable of living “long lives,” measured not by how many years we live, but by how we live those years. That our long life might extend beyond the days we spend here on earth.

The simple wisdom of Asher’s remarks made an indelible impression on me; I relive that moment over and over. It has spurred me to think about my life, and how I live it.

Fast forward two years to Asher’s bar mitzvah ceremony. I was on the bima as a representative of the Temple’s Board of Trustees. After completing his Torah and haftarah portions, I was called on to present Asher with his certificate and kiddush cup. I used that opportunity to share with his family and the congregation the story of Asher’s thoughts on living a long life. [Quite incredibly, Asher’s Torah portion was Chaye Sarah, the Life of Sarah.]

As I completed my remarks, I turned to Asher and said: “May you, Asher – by your own definition – live a long life, because you’re going to live a good life, and a life filled with doing many wonderful things.”

I have a poster in my classroom that contains a simple sentence: “As you teach, you learn” (מתוך שאתה מלמד, אתה למד), an old Talmudic saying emphasizing that teaching and learning are flip sides of the same coin. It’s the slogan I live by, and I resolve to learn something new every day, whether it’s on my own, or from my students. Asher’s lesson still resides with me; may all of our long lives be filled with moments of teaching and learning.

Tawonga just launched our very first bar and bat mitzvah training in the Bay Area, and I am so excited ...

Reflecting On A Year of Southern Jewish Life

Another school year has come and gone, and the ending of the school year just so happens to coincide with ... 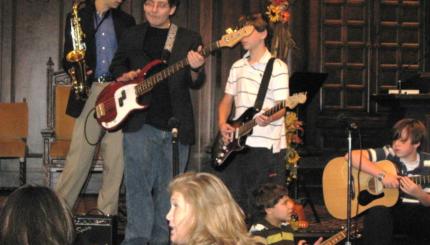 Who knew as a religious school student, I was preparing to teach my teachers?