The Torah of Space Exploration

Mars: One Blind Leap for Mankind

Somewhere, far away on a little red planet, a rover named Opportunity set out on a unique mission. For ninety days it would roam the surface of Mars, taking in and recording data about Earth’s neighboring planet.

Though made of metal and wire, I like to think that Opportunity started its mission as bright-eyed and bushy-tailed as any human being would be when arriving in a new place. I imagine the rover lighting up as it first felt the copper-toned dust underneath its wheels, singing an electronic symphony as it sent unprecedented amount of information back to the National Aeronautics and Space Administration from millions of kilometers away.

Ninety days turned into six months. Six months turned into a year. A year turned into five, into ten, into fourteen. And just like that, Opportunity became a teenager in a celestial land populated entirely by robot-kind. As the rover reached milestone after milestone, it was not truly alone. Opportunity began its voyage by following its twin, Spirit. Years later, Opportunity was joined by Curiosity, and later by InSight. Though the rovers’ paths never physically crossed, they journeyed onward, continuing on their respective missions.

These rovers forged a brave new world. They endured freezing temperatures and celestial dust storms. On June 10, 2018, Opportunity sent out its final message: “My battery is low and it is getting cold.” The rover entered hibernation, hoping to reboot once the whirling dust around it finally settled back into the surface of Mars. Either due to a catastrophic failure or covered solar panels, Opportunity was never able to end its hibernation stage. After eight months of hearing nothing from the scientific sojourner, NASA declared that Opportunity mission was complete and that the rover was finally put to rest.

In the hours and days following Opportunity’s “death,” people mourned the rover. They created web-comics to share their thoughts, commemorating the end of an era. NASA played Billie Holiday’s “I’ll Be Seeing You,” even bringing its own team members to tears. This begs the question: why do we, human beings, humanize and connect with robots like the Opportunity rover?

Perhaps the answer lies within their names. Spirit. Opportunity. Curiosity. InSight. These names epitomize the values we hold dear. These are the attributes that guide us to connect with each other, our world, and the cosmos that lay beyond. By naming these rovers after our own values, we connect them to the values by which we define our own humanity. We consider such work to be extensions of ourselves and the beauty, perseverance, and dedication that we invest into our endeavors. It is a natural part of human existence to see ourselves in the world around us, but also to see ourselves in the world that we continue to create.

In Genesis, God says “let us create [humankind] in our image, after our likeness.” This story of the creation crucially defines humanity – they are to be made in the image of God, to embody the ultimate heavenly Creator. The process of our own creation imbues us with the ability to be creators ourselves. Such a role is not one we have taken lightly; the Mars rovers serve of proof of this fact. In sending them out to explore and inhabit what lies beyond our little blue planet, we performed a revolutionary act of creation ourselves. We gave the best of the human experience – Spirit, Opportunity, Curiosity and InSight – to the great unknown.

So in the tender words of the last song with which we reached out to our own creation, Opportunity:

(Edited to add: In March, Curiosity was reset and has more adventures ahead; Opportunity still remains eternally at rest.)

Travel in your mind to the top of our atmosphere, where Earth’s envelope of life-giving oxygen and nitrogen blends into the cold vacuum of ... 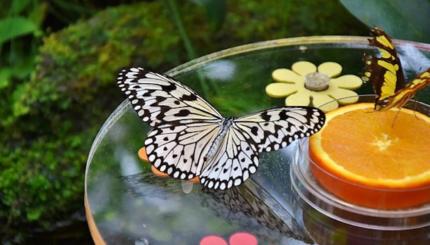 Don’t look now, but Passover’s not over.

Are We There Yet? Pluto and the Value of Patience

Here’s my favorite fact about the New Horizons flight to Pluto: New Horizons launched at 2 pm on January 19, 2006, ...