Tahara is sometimes done with little information except names– that of the meyt and those of our fellow team members.  Some who perform tahara find that reading the meyt’s obituary  gives us more context to bring the person into the room in their fullness; others prefer to leave out the details and bring pure appreciation of the meyt’s humanity.  We often do not know much about the people we serve on the hevra kadisha with either, spending hours in a room together working in silence.

From my work in the disability community, I have a strong aversion to people’s need to know more about marginalized people than they do about more centered identities.  Asking about a disabled person’s medical history or where a person of color is from, while on the surface may sound like curiosity, are in fact inappropriate questions. Curiosity in this case is cover for gawking and sensationalization, showing the asker’s feeling that they are entitled to information.

In light of the fact that trans and GNC people are deserving of recognition and affirmation and that creating a gender, a body, and a presentation is a life’s journey, I ask:  How do we respect this journey yet not make it the central focus of the preparation and tahara?

As I grapple with an answer to this question, I make explicit the assumption that the composition of the tahara team must be about bodies and/or identities that are similar to the meyt.  The goal here is to minimize any curiosity or exotification of the body.

The affirmation of the body’s holiness and ultimate beauty is key to every tahara. By the time of tahara, the human body is no longer at its most beautiful in our everyday understanding of the word. In the case of a trans person– someone who has likely spent a lot of life feeling their body to be confusing, abnormal or not worthy, someone who has worked so hard to get the world to reflect back the image they see of themselves– it is truly the greatest kindness we can offer.  We must commit ourselves to our ideal of Hesed Shel Emet, which here I will translate as the Kindness of Affirming Their Truth. We must uphold this even if the family does not accept the person’s gender identity. The family’s mourning and process around understanding of their loved one’s path is to be respected and supported, and this is managed by chaplains, rabbis, and therapists. The hevra’s role is to reflect the meyt’s understanding of themselves with dignity, love, and complete acceptance.

I identify as GNC, not as trans.  Still, the tahara room is the only all-women’s space I feel comfortable in– and I have given a lot of thought as to why.  Perhaps it is because all the gendering has been done beforehand. Once I am called, once I am at the funeral home, no one is emphasizing the fact that I am a woman; the fact of the meyta being a woman is also not brought up over and over again and being thrown in my face, contrary to the messaging in many other single-gender spaces..

But I think my comfort goes beyond that.  The tahara room is a place of ultimate body positivity.  There is no judgment about body size or shape, medical conditions and devices, the state of the skin or hair or lack thereof.  It’s just all not a big deal. Our task is fundamentally and crucially nonjudgmental in nature. No physical condition, or manifestation, or identity is cause for discomfort in the face of death.  And it seems to me that a natural extension of this acceptance would be making gender less of a topic of discussion than it is among the living, where people constantly want to categorize trans bodies and shoehorn them into structures they were never created for.  Our ability to care for trans people in death and to include trans people in our teams in life is something we are well-trained for as hevra members: to meet each body where it is, recognizing that we know so little about the life that it has led until we intersect at this very moment.


[1] Hebrew for purity, the ritual cleansing of a dead body in preparation for burial. (Definition from MyJewishLearning.com)

[2] I use “meyt” in this essay to signify the body of a person of any gender.

[3] Jewish burial society, a group of volunteers who prepare the body for burial. (Definition from My JewishLearning.com)

[4] Trans (transgender) adjective: An umbrella term for anyone who knows themselves to be a gender that is different than the gender they were assigned at birth. Some trans people may have an alternate gender identity that is neither male nor female, and for some people their gender identity may vary at different points in their lives. Some transgender people modify their bodies through medical means, and some do not. (Definition from Keshet: https://www.keshetonline.org/wp-content/uploads/2012/06/Keshet-Terminology-Sheet-2016.pdf)

[5] Cis (cisgender) adjective: A person who is comfortable in the gender they were assigned at birth.  (Definition from Keshet)

[6] Genderqueer, adjective:  A gender identity used by a person that self-defines their gender as queer or non-normative. Someone whose chosen gender identity is neither man nor woman, is between or beyond gender, rejects binary gender, is some combination of genders. (Definition from Keshet)

Living “Stealth,” As a Convert and a Trans Person

Even in a society that is making progress on LGBT issues, as demonstrated by the victories for marriage equality in ... 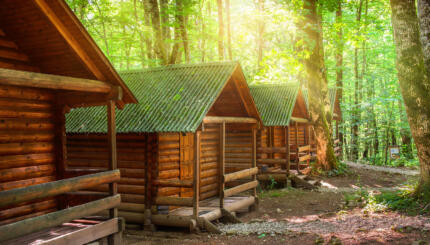 7 Ways to Make Your Summer Camp Better for Trans Campers

Gender-specific bunks and activities have historically been a big part of the camp experience, especially at sleepaway camp. While this ...