Navigating December as Part of an Interfaith Couple

Each of us has our unique rituals and family traditions at this time of year. In this piece, Kate Hermann-Wu, lead pre-school teacher at Temple Emunah, demonstrates how long-treasured rituals can change and adapt. Navigating December with an interdenominational family can be challenging, and there’s no right answer. Kate, her wife Ailsa, and their family had their own unique way of blending traditions.

I’m Jewish, and so are my parents and all my grandparents.  But the first time I ever experienced a “Jewish-style” Christmas was at age 40, with my then-fiancée (now wife) Ailsa and her family, who isn’t religious.

A little background first: my mother grew up in a Reform family that’s descended from German Jews, and her attitude towards Judaism has always been a mixture of pride and ambivalence. Many a Yom Kippur fast was broken by a feast of lobster or pork roast.  At the same time, a litany of who’s who and how they are related to our family accompanies most family get-togethers and any visits to a synagogue or Jewish gatherings.

My father, on the other hand, was raised Orthodox.  But his upbringing was so restrictive and unfulfilling that he was thrilled to jettison his religious practices and be embraced by his very loving, appreciative Reform in-laws. So my own Judaism growing up was not about following kashrut or similar rules, but spending time together for holidays and family celebrations.

This included one of my mom’s favorites – Christmas!  She had celebrated it growing up, and the tradition continued in my family with 15-foot Xmas trees, stockings and heaps of presents. Plus lots of silly rhyming poetry (doggerel) to add to the excitement.  It wasn’t a problem that we were Jewish. We were told that Jesus was probably our great-great-great-great-great-grandfather, so why shouldn’t we celebrate his birth too?

I didn’t know exactly what to expect when I went to Pittsburgh with Ailsa that December. Her parents had emigrated from Taiwan and China, weren’t religious, and didn’t raise their children in any particular creed. But I also knew that her family had had a tree and presents during Ailsa’s and her brother’s childhoods.  So part of me thought there’d be some trappings of Christmas.

Imagine my surprise on arriving at the home of Ailsa’s dad to find no tree, no presents and — craziest of all – Chinese food and a movie on Christmas day!

I was flummoxed. Where were all the beautiful lights? The tinsel? The excitement of wrapping and writing? Where were the Christmas carols and the feast?

Ailsa’s dad explained that since he wasn’t Christian and there weren’t any children at home anymore, he no longer celebrated Christmas. It made sense, and the movie and Chinese food were fun. All the same, I couldn’t help feeling like there was something missing.  More than just the decorations and presents, but a sense of togetherness from engaging in the same rituals and traditions year after year.

That spirit is what makes my own family’s holidays so special, including Christmas and the other important winter celebration, Hanukkah.

Unlike Christmas, Hanukkah was and is purely spiritual: lights, family, love, and blessings. We rarely exchanged Hanukkah gifts; that wasn’t the point. Nothing could have been more beautiful and meaningful than standing with arms around each other, as each person took a turn to light their menorah, and then singing and swaying to the melody of “Rock of Ages.” Even without presents, as a child I loved Hanukkah.

Fortunately Ailsa appreciates these traditions too. Even early in our relationship, she was happy to join my family in Newton every year for Hanukkah and Christmas. Other major Jewish holidays followed. Eventually, she decided to convert, much to the bemusement of my parents, who once advised another daughter-in-law to become Unitarian instead of Jewish, since “that way you can celebrate everything!”

Our being Conservative Jews, as opposed to being Reform or nothing at all, has naturally changed our lives in many ways. But some things are the same. We still gather throughout the year for celebrations, including Christmas and at least one night of Hanukkah. There is still a tree and poetry and presents at my brother’s house, singing and swaying and candle-lighting. The one major difference may be the food. There’s no more pork roast at these get-togethers, since it doesn’t work for too many of us: it’s not kosher, not vegetarian and it has too much salt!

A Christmas tree? In this nice Jewish girl’s home? Here’s how it happened.I am engaged to a wonderful man – ...

Why I’m Not Afraid of Natalie Portman’s Christmas Tree

Jewish actress Natalie Portman announced to Jimmy Fallon that she is going to have a Christmas tree for the first ... 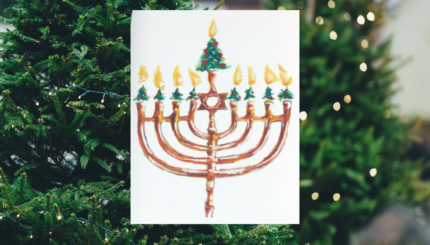 Navigating December as an interfaith family can be both challenging and rewarding.