As we approach our upcoming Festival of Lights, our stories about the Maccabees and our nation’s triumph over religious and political oppression. These stories fill us with anticipation for the holiday, but what lasting effect do they have on us once Hanukkah is over? It seems Hanukkah begins to fade away as soon as it starts, and we find ourselves back in our lives, with very few lessons we can apply for the rest of the year. A year filled with news coming out of Israel and the rest of the Jewish world that breaks the hearts of all who hear it. Whether we are talking about the kotel, religious affiliations, conversions, or the different Jewish ethnic groups, it seems like our divisions are defining us as a people. It’s with these thoughts in mind that I look to the Hanukkah story for inspiration and insight. But it’s not the victory of the Maccabees that has the most to teach us, but rather the often ignored story of what happened after the miracle of lights.

Since few people know what happened after the victory of the Maccabees, we need to establish some context before we continue. It turns out things started to fall apart almost as soon as we had finished lighting the menorah. After the Maccabees secured independence for the Jewish people, they appointed themselves as priests in Jerusalem and kings over Judea, then ordained that these roles would be passed down to their descendants (which would be called the Hasmonean Dynasty). In protest, two factions emerged and crystallized into the famous Jewish sects of the Second Temple Period. The first group was comprised of the Hellenized priestly class (called “Sadducees”), who felt the Maccabees had no right to the priesthood because they were not of proper “historic biblical lineage.” They also were of the opinion that Greek culture had a lot to offer the Jews. The second group, who opposed the Greek indoctrination of the Hellenized priestly class, while at the same time disagreeing with the appointment of the Maccabees to the  priesthood and monarchy, were our forerunners, the Pharisees. Both of these groups lacked the military strength to openly defy the Hasmoneans, but as is the case with groups who don’t have the ability to oppose those in power, subversion and politics became their strongest weapons. We now have enough context to see what this history can teach us today, and we will focus on the episodes that best mirror our reality.

Peace in Judea amongst Jews barely lasted until the second Hasmonean king: Alexander Jannaeus. As king, he continued the legacy of the Maccabees by participating in military campaigns against foreign powers. As High Priest, he sided with the traditions and observances of the Priestly Sadducees, which, in a famous episode preserved in the Tosefta, caused the Pharisees to pelt him with etrogs during a Sukkot service. Alexander ordered those that caused the disturbance to be killed; 6,000 people died that day. In response, when Alexander returned from an unsuccessful military campaign, he found that the Pharisees had incited a civil war against him and had made an alliance with the neighboring Syrian king, Demetrius III, to help depose him. When Alexander sought peace with the warring Pharisees, they told him the first and only condition of lasting peace would be his death. With no compromise in sight, the war went on for six years and claimed the lives of 50,000 Jews. Eventually Alexander was the victor against the Pharisees and Syrian forces, and thanks to a suggestion by a Sadducee named Diogenes, he made a loud statement to those who had betrayed him by publicly crucifying 800 Pharisees. (Antiquities of the Jews 13:380–1) Little did he know that the Pharisees would prove to be correct about one thing, peace really did return after his death.

When Alexander died, his wife,  Alexandra Salome , was chosen to be queen by all the different factions, which ushered in a short golden age for the Jewish people. She was an incredibly pious woman, causing the Talmud to praise her hundreds of years after her death. She passed laws for universal education of children and funded the construction of synagogues for throughout the land. She even tried to restore the balance of power among the Jewish people by re-establishing the Sanhedrin and populating it with Pharisees who had been marginalized for so long. But despite all her efforts for unification, we remained divided, and forced those divisions back upon her. The Pharisees wasted no time to use their newfound power to execute Diogenes, the Sadducee who was involved with the Pharisee crucifictions in years past. As rumors spread about more executions, the Sadducees became terrified for their lives and petitioned Queen Salome for protection from the Pharisees. Heeding their pleas, she sent the Sadducees away to fortified cities outside of Jerusalem. She did everything she could to unify the Jewish people during her nine year reign, but the divisions survived her and played out through her descendants, costing Judea its independence. Queen Salome was survived by her two sons, Hyrcanus the Pharisee and Aristobulus the Sadducee.

Hyrcanus was the High Priest when the Queen died and his kingship was usurped by Aristobulus, his brother. In the years that followed, the political divisions between the two brothers, fueled by the two main religious groups of Judaism, unraveled everything accomplished by Queen Salome. Unable to settle their differences, Hyracanus and Aristobulus repeatedly requested arbitration from the political superpower of their time: the Roman Empire. Despite the negative view we now have of Rome, history tells us that originally, the Romans had been hesitant to conquer Judea, as they had an alliance which dated back to Judah Maccabee himself. In support of the ongoing treaty with Judea, Rome sent officials to hear the cases of Hyrcanus and Aristobulus to determine who should be the ruler and continued ally of Rome.

The final Roman decisor was general Pompey, who attempted to mediate between the two brothers since no progress was being made due to both brothers sabotaging each other and trying to out-bribe the Roman officials. In the midst of deciding between the two brothers, a third delegate appeared (considered by many historians to be a representative of the Pharisees) who argued that neither brother should rule. He pleaded that rulership of Judea should be given to the Sanhedrin alone. Upon seeing the extent of the division between the Jewish people, Pompey seized Judea for the Roman empire. This final act set the stage for one of our darkest times: the eventual exile and dispersion of the Jewish people.

Like the Maccabees, we are once again living in a time of a great miracle, the rebirth of our homeland, the State of Israel. And like the Maccabees, we are divided along religious and political lines, with no middle ground in sight. It’s so easy to mistake differences in religious practices for divisions so deep that no one can come together like the brothers and sisters we are supposed to be. The Maccabees showed us what happens when we side with our religious ideologies rather than our brothers, and there’s no reason to repeat their mistakes. As we prepare to light our Hanukkah Menorahs this year, may we merit the wisdom to put into action everything the Maccabees have to teach us, both about the light, and about the darkness that follows.

At Hanukkah, shifting the focus from militarism to miracles. 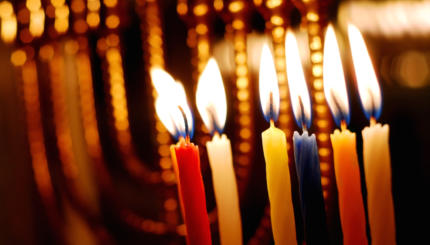 The Lesson of Hanukkah

Hanukkah points to the fragility of historical redemption and the ambiguity of its messengers and leaders.