Sukkot: A Time (and Place) for Welcoming

The theory of a sukkah feels queer to me – a temporary, self-built space for the purpose of shelter, but also importantly with an open roof for a view of the stars. It reminds me of a garden witch, a midwife, an herbalist lesbian pulling herbs from her garden to dry and dangle from the door of her room. It reminds me of alternative histories, and sets of knowledge – my friends sitting around a coffee table analyzing each other’s birth charts, brewing each other rose bud tea for aching hearts, or mixing personalized lotions and sugar scrubs with lavender for soft skin. LGBT communities, LGBT families, are temporary structures for safety like the sukkah itself. They’re built out of necessity, with open roofs and a mystical air. They’re comforting, they’re placeless, and they’re adaptable.

Sukkot feels mystical. It’s nights spent staring through wooden beams at thick stars, with the spiciness of cloves, and lemony etrog floating around you. Feast of Tabernacles sounds like a tarot card.

I’ve been interested in the thorough methodology of Sukkot’s harvests, the mystical components of plants we collect for spells of safety, holiday, a good night’s sleep in the outdoors. For Sukkot we pull from a theory of herbs and plants from a history of herbalists in gardens – searching for remedies for every ailment. In this way, Sukkot feels healing in a way that’s queer, and flowery. Its components have specificity, care, and history. The scents in the air, the view of the unknown and wondrous sky are curated for the holiday. It’s a holiday about awe and magic in a shelter built by the hands of a community.

Decorating my first post-grad apartment also feels like Sukkot – the collecting of natural tchotchkes, string lights, jars of herbs, Yankee Candles my twitter mutual traded me in the parking lot of the library. As an interesting exercise, this Sukkot I’ve been burning my Yankee Candle Christmas Cookies jar – the furthest thing from Jewish, or natural. My apartment smells sugary.

This is the second Sukkot I’ve been out as a lesbian, and this year I’m thinking about the idea of a queer natural shelter, temporality, mysticism, and flora & fauna. It’s also during the final weeks of a presidential election – another one in a string of elections where climate change hasn’t been addressed with urgency or seriousness. Spending a day outdoors in October 2016 requires an awareness of global climate disasters, including Hurricane Matthew. Sukkot this year is standing outside under a branch cover and checking your smartphone for updates up on natural danger.

When I was in middle school, my mom and I built a sukkah in our backyard and the two of us and my dog slept in it a few nights. We ate at a table in the sukkah, and slept in sleeping bags on the cement of our backyard path. I stared up through the pine branches on the roof and pointed at the Big Dipper. I woke up to my dog’s nose sniffing in my face. The ground was difficult to sleep on because it was cement, and I wished we’d built it over a lawn.

My synagogue growing up had a massive sukkah. Each grade in the Hebrew school would make a different craft, and we would gather inside of it to hang it from the ceiling. The sukkah felt endless. We made tissue paper and pipe cleaner flowers, and pierced lemons with cloves. I learned the word “aromatic” from my mom one sukkot, attaching herbs to fruits and placing them in a plant filled sanctuary. Judaism rejects the idea of false shrines. The sukkah isn’t a shrine, it’s a flowery and fruity pop-up gallery, or seasonal burrow. The sukkah feels like, at the end of the world, they will exist between the trees of empty forests.

This year I didn’t build a sukkah. But I put my cat on her leash (which she has been reluctantly getting used to) and sat out on my porch to view the stars. My porch is sparsely decorated with foam tombstones in anticipation of October’s other, other witchy holiday. I pulled on my moonstone necklace and thought about astrology. Astrology has returned as a trend among queer youth. Yet, the stars still have influence in my life through the lens of Judaism – largely with the High Holidays which stress self-reflection and consideration while pondering the major questions of the universe and your place in it. Lately, the stars have felt more gay than Jewish to me. I’m trying to find a decent balance, but it’s a hard choice to make.

A Jew. A Queer. But a Jewish Queer? Keshet Youth Shabbaton Reflection

I’ve never been one to have high expectations. I tend to take situations as they come and to be spontaneous ... 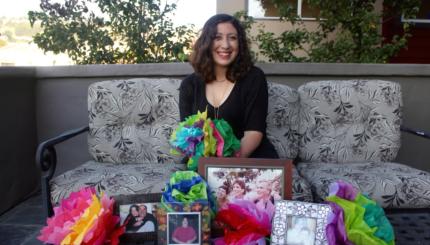 What Sukkot and the Day of the Dead Have in Common

Bringing together my Mexican and Jewish heritages.

How to celebrate the Festival of Booths.