It was mid-morning on a Wednesday. I was serving as visiting faculty at our regional Reform Jewish overnight camp and was sitting with 50 high school age campers when Hitler started speaking. I had to resist the urge to leave the room when I heard that voice and its inflammatory speech. I listened uncomfortably to those hate-filled words, but what came next was inspiring. This program was part of a regularly scheduled daily shiur (educational lesson). What’s special about Jewish overnight camp is that exploring being Jewish is part of the program. In addition to the sports, arts and crafts, swimming, 65 foot alpine tower and high ropes course the campers enjoy, the kids also live Judaism and explore its meaning and personal relevance to how they live their lives and make decisions. This summer’s theme was “Jewish Values through a Modern Lens”. During the shiur, campers explored Jewish principles like “Do not stand idly by the blood of your neighbor (Lev. 19:16)”, “Love your neighbor as yourself (Lev. 19:18)”, “Do not separate yourself from the community (Avot 2:4)”, and how they pertain to current hot topics such as gun violence, immigration and criminal justice reform.

In a safe space, campers were encouraged to share their opinions and struggle with these very real issues. Without judgment. Without criticism. The conversations that ensued were heartening. One teen spoke about how scary the current tenor in our country is, how it motivates her to speak out against bigotry and hate. Another teen said that Judaism grounds him in knowing that when he advocates for social justice he is doing the right thing.

At a time when it is easy to be discouraged by the violence and divisiveness in our country, I became filled with hope listening to these kids. They not only understand the connections between the age-old Jewish wisdom of our texts and values, but they feel it in their core. Camp empowers our children to be themselves and to celebrate who they are. The sound of that hate-filled voice became drowned out by these kids finding their own voices and claiming their faith for themselves. How will they live Jewishly in the coming years? I don’t know. I can’t predict the choices they will make, but I do believe that they will be inspired by the Jewish values they explored here at camp. I am encouraged, because these teens will shape our future. I believe with perfect faith that they will illuminate a better path for us all.

Rabbi Melinda Mersack is the Director of jHUB, which provides new ways for interfaith couples and families to comfortably explore Jewish culture in the modern world, a program of the Jewish Federation of Cleveland and the Jewish Education Center of Cleveland and an InterfaithFamily affiliate. Rabbi Mersack is proud to be a Rabbis Without Borders Fellow and a Brickner Fellow of the Religious Action Center of Reform Judaism. Rabbi Mersack attends summer camp as visiting faculty every year, and is an advocate for interreligious dialogue and social justice. She holds a B.A. from Washington University in St. Louis, and a Masters of Hebrew Letters and ordination from the Hebrew Union College – Jewish Institute of Religion. 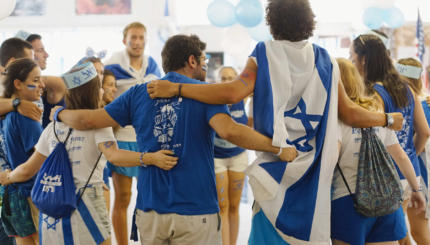