When Politics are Deeply Personal: 10 Years of Marriage Equality in MA

Embedded in our communal and organizational DNA is the belief that all people come before the government with an equal right to justice, liberty and the freedom to live lives of dignity. The struggle for civil rights and equality under the law are not merely aspirational, but a daily motivation that guides our work in helping to shape public policy and create a just community.

Over the past several years, the Jewish Community Relations Council of Greater Boston (JCRC) has worked with our partners in the Jewish community and beyond to promote a safe, accepting, and nurturing civil society for LGBTQ individuals and families. To succeed at changing public opinion, and more directly, at giving public policy makers the cover to move faster than their constituents often requires a call to a higher motive – namely to humanize the abstract.

When we first started our advocacy efforts to extend anti-discrimination protections to transgender people, the understanding of gender identity had not yet penetrated the public consciousness. This initial barrier was not unlike other civil rights struggles in history, where the status quo stands as a solid block to the other. But in this case, many legislators had not talked to a transgender person and knew nothing more than the outlines of something that felt different and hard to comprehend. To break through, we and our partners knew that the public needed to get to know people who are trans, learn their stories, hear their struggles and their basic yet essential goal to simply live, work, and love without fear of persecution, retaliation, or humiliation.

We all knew that this was a long-term goal and that change would not come overnight, but JCRC was proud to stand with our allies in 2011 as then-Governor Deval Patrick stood shoulder to shoulder with LGBTQ activists, leaders, and people to sign An Act Relative to Gender Identity, which prohibited discrimination against transgender people in employment, housing, credit, and various services. This was an outstanding moment of accomplishment for the Jewish community and our allies, but it was clear that more had to be done.

During the current legislative cycle, we have continued our partnership with the same coalition to extend those same protections to places of public accommodation. This is a fancy way of saying that people should be allowed to affirm their self-defined gender in public places. It was a moment of pride when JCRC joined with Keshet, the ADL, and members of the clergy to speak directly to the Governor’s administration about the Jewish perspective on the need for these extended protections. We all knew that making this personal and tying the message to our values would resonate.

But it is not solely in our direct advocacy where we seek to impact the public perception. The JCRC Legislative Reception this past February focused on women in leadership where we honored trailblazing women who have used their roles to highlight the importance of diversity and of ensuring that women have the same access to the seats of power. At this event, we honored Raffi Freedman-Gurspan, the first openly transgender woman to work at the White House. Raffi spoke about how her experience in Massachusetts and within the Jewish community had helped her make history and this message resonated clearly with the leaders of the legislature watching her accept her award. Since accepting the award, Raffi became the first out transgender person to serve as LGBT liaison in her new role as the Outreach and Recruitment Director for Presidential Personnel and Associate Director for Public Engagement.

It is in Raffi’s name and in the names of the countless other LGBTQ people who have been subject to discrimination solely for affirming their true identity, that we are proud to act, to advocate and to persuade our policy makers to end officially sanctioned and permitted bigotry and discrimination from our society. 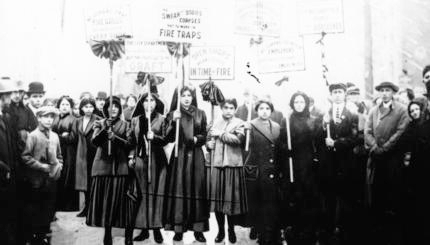 Laban and Jacob's business relationship teaches us about the importance of ensuring ethical working conditions.

Why I’m Passionate about Transgender Justice

If you’re in Boston, please join us for Transgender Day of Remembrance on November 23rd at 2:30pm in John F Kennedy Park. After, we ...

The Road to Pride: Supporting My Transgender Daughter

My newly turned 12-year-old child walks into the room trembling and crying.This is going to be huge. I wondered if ...