Yes, it’s true. The Chief Rabbi of Uganda has been elected to parliament in his home country. A remarkable feat for a rabbi outside of Israel, not easily achieved.

As Rabbi Gershom Sizomu reported on Sunday February 21, 2016, “I’m happy to inform you that I was announced winner of the Bungokho north seat for Uganda parliament. The contest was very close and the loser is petitioning court claiming that there were some irregularities. I thank you so much for your support and for believing in me.”

Early on, Rabbi Sizomu saw the strengthening of Jewish life in Uganda not only as a good unto itself but also as a means of bringing change to his country. Rabbi Sizomu’s top priorities, as a young man, were his desire to attend a top rabbinic seminary to connect his isolated community with Jews in the West, improve the health and economy of the Abayudaya and his neighbors, and to run for political office. These distinct elements were intertwined in his mind and with hard work and lots of support and community, he is well on his way to achieving his goals.

A major contributing factor to Gershom Sizomu’s political aspirations was his experience as a child growing up under the reign of Idi Amin Dada from 1971-79. Judaism was outlawed and the persecution of his family and community he witnessed was instrumental in forming his identity and life goals. He was a youth leader in the ’80s, and along with his brothers, JJ, Aaron, Seth and other teens, were responsible for gathering the community back together. They are today’s current community leaders.

I met Rabbi Sizomu in 2002 and Be’chol Lashon granted him a fellowship to attend the Ziegler School of Rabbinic Studies at American Jewish University in Los Angeles from 2003-2008. He had the opportunity to see American democracy in action and to study Torah at the same time. Working closely with Rabbi Brad Artson, dean of Ziegler and Rabbi Camras from Shomrei Torah, he expanded his understanding of the way communities can come together and change the world around them. He began to envision the ways in which strengthening the Abayudaya and their immediate neighbors might also lead to larger changes for Uganda.

Even while living in the United States, he continued to work with the Abayudaya leadership on the ground to change the future of the community.  At the request of Rabbi Sizomu and the Abayudaya Executive Council, Be’chol Lashon created a health & economic development plan. The first step was a feasibility study to assess the need for basic services. The research, conducted by an American tropical disease specialist and an Israeli engineer with the American Jewish Joint Distribution Committee, indicated that the lack of clean water and mosquito nets caused overcrowding and poor healthcare services. As part of the multiphase plan, Be’chol Lashon worked with the Abayudaya raise funds to drill wells and install a central tap stand in each of the six main Abayudaya villages. Mosquito nets were distributed from the local synagogues in all the villages. Now that disease prevention measures were in place, a health clinic capital campaign was launched. The Tobin Health Center opened in Mbale in 2010, dedicated by funders, Joe and Debs Weinberg and Jill and Steve Edwards, to my husband, Gary Tobin, of blessed memory, who had died the year before. Notably, there have been no deaths from malaria, the primary cause of death in Uganda, in the community  as a result of these efforts.

As Rabbi Sizomu envisioned, all of these positive outcomes reach all members of the community in Mbale, regardless of religious affiliation. The Christian and Muslim neighbors of the Abayudaya access the clean water. They too get mosquito nets and health care. Sharing these benefits has not only led to increased quality of life for all but better understanding and goodwill across religious lines. The synagogue center currently being built will provide not only a place for Jews to pray and gather on Shabbat and holidays but also the only childcare available for all mothers and a community space for education and entertainment. The Jews of Uganda are seen as they are, generous and caring for all. And it was on this Jewish-Christian-Muslim connection that Rabbi Sizomu began to build a coalition of people of faith and goodwill to work together to engage politically and bring change to the national level.

However, envisioning large political change and achieving it are not one and the same. Rabbi Sizomu ran for Parliament five years ago. At that time, although he won the popular vote, it was reported that the opposition party, backed by the government, illegally stuffed the ballot boxes. Undaunted, he ran again this year, much to the concern of many of his supporters who not only felt this may be another exercise in futility, but were also afraid for his safety given the politics in Uganda.


Gershom is a relentless optimist and a man of action. He doesn’t subscribe to perpetuating negative troupes of oppression and negativity. It is also a testament to how thriving Jewish life can be a light unto the nations.

A Typical Jewish Mother… in Uganda

In my early 30s, I had exciting opportunities to visit and work with public health projects in Uganda several times. ...

Hanukkah Light for Women in Uganda

More than anything Nalugya Rehema wanted to be a mother. She was very happy when she got pregnant, but she ... 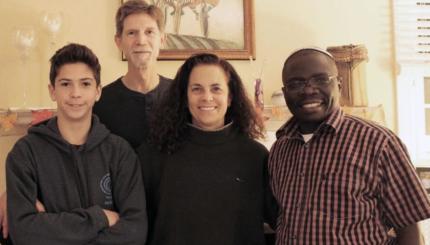