What A Night With My Young Nieces Reminded Me

A Report from the Field: Keshet at the Hillel Institute

There are certain parts of being a Jewish professional that only other people in “the business” will understand. Buzz words like heritage and continuity have multiple meanings, food at most gatherings is a given, and the ridiculous amount of automatic replies received is just something you learn to expect if you are trying to get anything done in September (around the High Holidays). Which is why, along with having a building full of great coworkers, I am lucky to have a special friend to be on the other side of my Gchat exclamations and Jewish professional rants.

Dafna and I have been friends since high school. After spending time at a Jewish Day School, she joined us public school kids. We immediately bonded over Internet cartoons and updating our Livejournals. Back then we drove in the car with the windows down, played frisbee and ate a lot of pizza, not knowing that more than a decade later, we would be chatting from our Jewish nonprofit offices about end-of-year giving. These days, I’m running Museum and Special Projects programming for the ISJL, and Dafna is the Communications Associate for the Jewish Teen Funders Network.

It’s nice to have someone to talk about Jewish Work Stuff with day-to-day — and for this blog, I figured I’d do some more Talking About Jewish Stuff with Dafna, and make it into a conversation to share with our readers.

Rachel M: So hey, welcome to the Southern and Jewish blog, it’s great to have you.

Dafna L: Hey, long-time lurker, first time contributor here. Thanks for having me!

RM: Tell me a little about your day to day as a Jewish professional in New York City. What do you have for breakfast?

DL: Funny you should ask – I’m actually working on a story pitch right now about the breakfast and lunch culture at Jewish organizations, which I think says a lot about what’s popular in the Jewish world: Morning meetings require bagels for breakfast, but lunches are often Israeli food, like hummus, falafel, tabouleh. It’s like saying all right, we’re keeping our old school American Jewish roots with this lox and schmear, but we’ll have this new, exciting food for lunch as a nod to the younger generation. You’re probably one of my only friends who would really get that.

RM: Hahaha, I really do. Because even in Jackson, we have bagels for breakfast and falafel for lunch. I think here it’s more that we have limited kosher/vegetarian options but yeah, we choose the appropriately themed ethnic food because we assume our group will like it.

DL: And no one even discusses it, right? It’s just understood that these are the foods we eat in this profession.

RM: So in thinking about when we first became friends, it wasn’t because we were Jewish. We started spending time doing theater/newspaper things and our group of friends turned into a diverse group of nerds. (Shout out to the Exclusives!) How do you think we got here professionally, and what does that say about the efforts that we are promoting for young people to be involved in Jewish life and culture today?

DL: In the Jewish world there’s this crisis of what to do about engaging teens and “keeping them Jewish” into adulthood. That’s part of what drew me to Jewish teen philanthropy – here’s a model that pairs literacy in Jewish texts and values with the world that teens actually live in. It gives them an opportunity not to choose – Jewish or secular – but to bring their Jewish thoughts and ideas into real practice through helping others, who are also often Jewish. I grew up Jewish, but I wasn’t interested in making Judaism my only identity – I think you’d say the same for yourself – yet apparently that was still enough to lead us to the Jewish professional world.

RM: I would, yes. And not to dismiss the influence that BBYO (a Jewish youth group) and Brandeis (a Jewish-founded university) had on my Jewish trajectory but being “professionally Jewish” has a different impact on my identity and our friendship. In high school it wasn’t what brought us together, but now we can bond and commiserate over the blank stares we get when we talk about work or how long it takes to get an email back when Rosh Hashanah, Yom Kippur and Sukkot all fall during the week.

DL: Definitely! Most of my social circle isn’t Jewish, and there is a gap in their understanding of the Jewish nonprofit world as opposed to “secular” nonprofit work. People ask a simple question about the organization’s mission or office culture and it takes a lot of explaining – so much backstory or explanation of Jewish culture or concepts. It never stops amusing us that we actually have that shared understanding. It’s something that I think a lot of people in the Jewish nonprofit world – who may often keep a primarily Jewish social circle – take for granted, but we both really appreciate to have with each other.

RM: Right, exactly. I know you’ll get it. Like when I chat about finding that cover photo for our quarterly magazine that sums up the ISJL’s commitment to Jewish life, you know I’m looking for that cute kid lighting Shabbat candles, ideally smiling with a grandparent. That’s just part of it.

DL: I need some new photos for our homepage slideshow… let’s coordinate. Maybe we should start a Jewish stock photo company.

DL: Perfect. Just have to make sure the photos are impossibly active and include an equal number of boys and girls doing Jewish things.

RM:We clearly have lots of similarities in our day jobs, what do you think some of the differences are between doing Jewish communal work in NYC vs. Jackson, Mississippi?

DL: It’s really amazing to hear about your work outside of the Jewish nonprofit “capitals” like New York, DC, or Los Angeles. Up here it’s really its own industry, and there’s pretty much a Jewish organization for every mission and cause —  but then you tell me about how you are just the one organization in the region supporting Jewish life, and I get this image of you on the frontier and realize that our experiences are as different as they are inherently similar.

RM: Yes, I get a thrill out of being that lone dot on the map who is implementing some grant or program along with that big cluster of dots in NYC.

DL: Speaking of, I have to get back to work and brag to all my colleagues that I’m working on a blog post with someone at the ISJL. In these parts it’s like saying you know where the lost tribe lives.

RM: Awesome, you can tell them we have teens here too!

Thanks to Dafna for allowing me to publicize our longtime Jewish friendship! 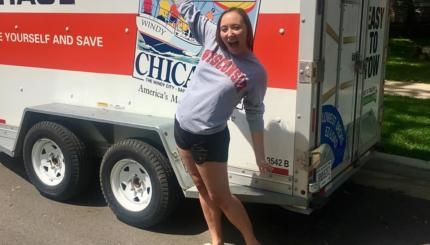 I was thankful to have so much to share at my Ripon reunion this year.

There’s Something Special About The South

Before I moved to Jackson, Mississippi, in 2003, I had only a passing familiarity with the South. Yes, I had ...