I have a new favorite TV show: “Once Upon a Time.” I’m late to the game — it’s currently in its fifth season, and I’m working my way through Season Two on Netflix. The basic premise, for those who haven’t seen it, is that the wicked stepmother of Snow White (Regina), determined that Snow and her prince should never find happiness together, casts a spell on the entire kingdom (which contains every fairytale character you’ve ever heard of and some you haven’t) and transports them to a sleepy town (that previously didn’t exist) in current-day Maine.  I love the show for many reasons — it weaves flashbacks to the fairyland characters and their stories with the roles they play in contemporary Maine. And many of the fairy tales that you thought you knew and loved are given incredibly creative twists — it is midrash for fairytales!

I was particularly taken by one of the episodes in Season Two. We are taken back, in flashbacks, not to fairyland but to the first days that the characters arrived in Maine. But something has gone wrong with the spell. Yes, the evil stepmother, Regina, is still in control (she is the mayor of the town) but every other character is replaying the same scene day after day, “Groundhog Day” style. Everyone is doing precisely what she wants, but she’s not happy, because they are not doing it because they want to!

Then, the unexpected is thrown into the mix — a father and his son who happened to be camping in the woods nearby on the day that the town magically appeared. They are not “meant” to be there, introducing an element of the uncontrollable and unpredictable which, at first, troubles Regina, but then delights her as she realizes she has the potential to use her charm to invite and encourage them to stay. Needless to say, things don’t go the way she wants them to, and she ends up responding in rage.

Last night, with my mussar study group, as we explored trust and faith, this story came to mind as a wonderful exemplar of our conversation. We started with this deeply insightful definition of faith by one of my favorite contemporary teachers, Brene Brown:

“Faith is a place of mystery, where we find the courage to believe in what we cannot see and the strength to let go of our fear of uncertainty.” (in ‘The Gifts of Imperfection: Let Go of Who You Think You’re Supposed to Be and Embrace Who You Are”)

Regina has cast a spell intended to give her total control over everyone from fairyland. She thinks that this is what will fulfill her. But soon she is bored by the monotony and predictability of the situation. So she seeks out that which has come into the picture unexpectedly. Now the outcome is no longer certain and predictable. For a while, that is delightful. Then it causes anger, resentment, and pain, as the lack of certainty and control becomes unbearable for her.

How many of us travel through life, bouncing between these two poles? Sometimes frantic at our lack of control in a situation, and at other moments in our life so craving of the unexpected and unknown?  I love Brene Brown’s definition of faith because she demonstrates that faith and religion are not always the same thing. Someone can be religious but define their faith and practice in ways that seek to explain everything and bring a high level of control and predictability into their lives. And some people who do not practice a specific religion live with a deep sense of faith, as defined by Brown.

One of our group recalled a teaching of Reb Zalman Schachter-Shalomi z’l that we had studied together at a Selichot gathering two years ago. He describes faith as ‘a relationship with the Cosmos’. He explains that Faith doesn’t work as a noun. ‘Nu, you should have Faith?… you should go to the grocery store and buy some?… it doesn’t go that way.’ He explains that faith is a verb – faithing. ‘I open myself up to the Central Intelligence of the Universe so that I may live according to the purpose for which I was made.’ He talks about surrender – letting go of how I want the universe to be and asking the universe ‘how do you want me to understand you?’

There are many moments in my life where my body tenses up and I feel frustration at my lack of control. But, like Regina, I have also learned that seldom when I am being at my most controlling am I in genuine relationship with the person or people in the situation I seek to control. Ultimately, that is destructive and it is not satisfying. So I won’t trade in my faith for control. My faith is based on a deep sense of not knowing. With that comes pain and loss. It makes us vulnerable. We have to learn how to trust. But without it life becomes unbearable in so many ways. 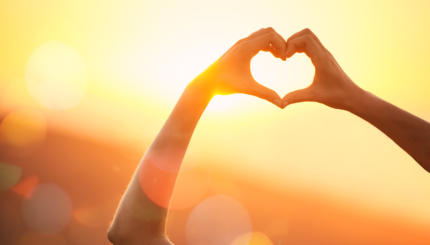 Veahavta: And You Shall Love

The first paragraph of the Shema offers three models for loving God.