Tu Bishvat and the Spiritual Meaning of Tax Season

This year Tu Bishvat begins at sundown on January 24, 2016. May the holiday be a catalyst in bringing your best intentions to fruition.

Tu B’shvat, the 15th of the Hebrew month of Shvat, is often referred to as the Jewish Arbor Day. In early rabbinic text, Tu B’shvat is referred to as “Rosh HaShanah La’Ilanot”, literally the “New Year of the Trees.” In our day and age, one in which our abuse of the environment is evident to almost everyone in the scientific community, it is a source of pride that the Jewish tradition has always been wise to draw special attention to the trees, and to nature in general. We might consider Tu Bishvat the Rosh Hashanah of Eco-Judaism; the current within our tradition that has directed special energy towards environmental causes.

In Temple times, it was from Tu Bishvat that the age of trees was measured, and thus, the acceptability as Temple offerings were calculated. So, in it’s origin, the holiday held rather practical considerations, and filled a concrete need on the calendar. In the Middle Ages, the observance of Tu Bishvat seemed to have dissipated, but later had a resurgence with the growing popularity of Jewish mysticism, Kabbalah. For the Kabbalist of the 16th century, the trees and their fruit became a great symbol for the possibility of transformation and spiritual attainment. With the birth of the modern State of Israel, from the perspective of the religious and secular alike, Tu Bishvat has returned to its original, concrete focus: the Jewish National Fund has always used this days to plant trees and remind world Jewry that each of us has a part in literally ‘making the desert bloom’.

This year, I’d like to remind us all of the psychological dimensions of Tu Bishvat; perhaps we could add this perspective to our otherwise more literal approach to the holiday. Tu Bishvat can be seen as time dedicated to seeding our lives with creativity; for tending and cultivating (pruning?!)our best characteristics, and for transforming our potential to lead better, meaningful lives, into =- fruitful (pun intended) action to do so.

In Genesis, from within the perfection of Eden, God commands Adam, “But from the tree of knowledge of good and bad, do not eat” (Genesis 2:17). In the hyper-literal reading of our sages, we notice that the verse does not mention the fruit of the tree, but rather the tree itself. It is as if ‘good’ and ‘bad’ live in a state of potentiality within the fabric of the tree. This potential for both ‘good’ and ‘bad’ are relegated to inert ideas, Platonic ideals maybe, and only become activated when Eve and Adam eat from the tree.With this in mind, this Tu Bishvat lets us each ask ourselves some invigorating, metaphorical ‘tree’ questions: 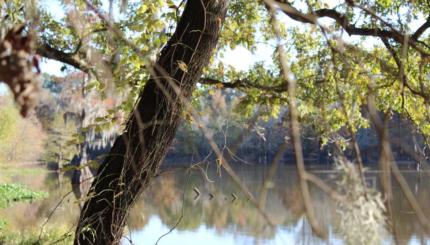 Photographing nature in the Deep South makes the New Year for the Trees feel even more special.

Happy Tu Bishvat! Today we celebrate the birthday of the trees by eating fruit, nuts, grains, and other things that ...

A contemporary form of Judaism that focuses on our relationship with the environment and expands the focus of Tu Bishvat.