Will the Real Chanukah Hero Please Stand Up?

(Yes, spoilers. Get over it)

In Emily Nussbaum’s superb New Yorker essay about the television series “Marvel’s Jessica Jones,” she asks, “Jessica hates Kilgrave, so why, when he requests a selfie of her smiling, does she send him one?” (She doesn’t really answer this question, but the series does). Jones’ reasons are not – precisely- strategies (as Nussbaum puts it), but are heroic in a way that we are unused to seeing – at least in our visual entertainment media (television, film, comic books). The words -“I love you” – that are too often thrown around in shows aimed at women are not uttered by Jessica until the very end, and it is her love, not for a man, but for her sister, Tricia, which saves her, over and over; and more importantly, it is Tricia’s love for her – both demonstrated not in words, but in their actions, each risking themselves and the piece of themselves that they hold most privately, most closely – for one another.

Who are the heroes of this show? Jessica, yes, but despite being a “superhero,” it is not because of her superpowers that she is heroic.

In fact, just as heroic is Tricia, who is “merely” human.

Tricia, in fact, may be the most interesting character in the series. As merely human as she is, she trains her body in the hope that it will protect her – and Jessica. But there is one moment, where she decides to try to be a “superhero” as well, taking a drug that might well kill her in order to -for a few minutes- have the superstrength that might save her and Jessica. And it does – and does not.

What a rush, she says. But, it turns out, it’s not such a rush. That burst of physical superhero strength nearly kills her. What a metaphor that is.

There is a third hero. One might think it would be the also-superpowered Luke Cage, but it isn’t – it’s the drug addict,  Malcom, enslaved to drugs by Kilgrave in order to spy on Jessica. His heroism lies also lies in his relationship with Jessica, through which he is able to make the effort to overcome his addiction and return to his goal of helping others, being a social worker. His heroism is the very human heroism of overcoming what another  has made him, even as he wonders what part of that giving-in to addiction was already within him all along.

Yet he organizes and comforts the other victims, saves and helps Jessica, and befriends the craziest, most annoying and unlovable person on the show, and even -despite having exhausted his last straw, once again returns to help Jessica, because in his desire to help others, he is able to overcome himself.

Jessica is a hero, but her heroism doesn’t lie in her super strength, or her “almost flying,” or even, in the throes of her PTSD, her noir-derived super-ability to consume enough alcohol to fell an ox .  Her heroism, like Tricia’s and like Malcom’s, is embedded not in her power, but in her weakness, and her ability to overcome it when others need her.

Compare their heroism to the villain: even his superpowers are somewhat beside the point. He may have the ability to force people to do whatever he says, but ultimately, he is a spoiled child having a tantrum, who wants only what is denied him, and is convinced that he deserves it. He believes that getting the girl is his right -regardless of whether she wants him- and there’s nothing especially unusual about that these days. Not even, in these days of mass shootings, the body count he racks up when she denies him.

No, none of these are -in their most salient features- beyond human capacity. Rather, each hero in their own way, conquers their fears, their compulsions, their histories, their weaknesses. In overcoming themselves, each is able to help the others enough that they can achieve what might seem to be beyond human capacity. Even Jessica ultimately is saved because as she submits to Kilgrave’s power and says “I love you,” she turns it, not to him, but to Tricia.

“Heroes, for me, was always one of the great Bowie tracks. It is heroism in the face of oppression and desperation; it’s something triumphant despite the desperate situation.”

Everyone wants to be a hero. I know I did.

READ: David Bowie Was Into Kabbalah and Other Jewish Facts About the Rock Icon

Of course, it’s unrealistic for anyone to expect such a thing from himself or herself – and yet, I think many of us believe, somewhere deep in our hearts, that we could be, or should be, and are disappointed not to be, mighty men and women with superpowers.

And yet, maybe, maybe it’s not totally crazy.

Pirke Avot asks  איזהו גבור -Who is a hero? Its answer: The one who conquers their own impulse.

Jessica Jones tells us that to be a hero, we don’t need superpowers, and that even for superheroes, those powers are not what make them heroic. What makes a hero is within our grasp – service to others, submitting our impulses to the strength of our continence, overcoming nothing so much as ourselves. Love: Not romantic love (“I know what love is – I watch television!” says the villain), but something bigger – I’m not sure there’s a word for it in English, it is the small constancy of Odysseus’ Penelope; the cultivation of continence; the life of service; the deepness of friendship.

It isn’t that we have to have heroic lies, but today, we can stand up against a bully, speak out against something popular but wrong, and even, occasionally, get to be a superhero in the traditional, comic book sense. Just for one day. But if I can do something today, well, every day is today. And they add up to a life well-lived.

In Pursuit of Learning

Yesterday was a big day for our family. My daughter graduated from college. She was the fourth of our five ... 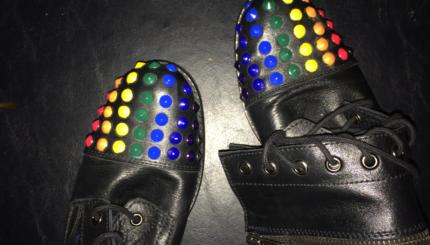 Bad Things Do Happen to Good People … Thank God That They Do!

“Why do bad things happen to good people” is the most fundamental question of theology. Just about everyone has given ...