When I first told people that I was moving to Mississippi to work for a Jewish organization, I received a wide variety of reactions.

“Why would you even think about moving to Mississippi?”

“Are there Jews in Mississippi?”

“You’re crazy! Don’t come crying to me when you have to deal with all that anti-Semitism.”

Keep in mind, these responses were all from people raised in the North, who had lived at least four years of their lives in New York, where I went to college. Luckily for me I knew that my friends and co-workers largely had no idea what they were talking about — after all, they didn’t know the South. I grew up closer to it, in Northern Virginia.

But I’ll admit — when folks kept warning me of anti-Semitism in the Deep South, I was a little nervous. It was something that I luckily never had to face growing up in Virginia, in a large Jewish community. But… Mississippi? Maybe they were right. Maybe I should worry.

So I worried. Until I’d been down here for about a week, and had those worries quickly shattered.

Many big projects come with moving to a new place, including furnishing a new apartment. This was a daunting and frustrating process which consisted of hours combing through Craigslist and consignment stores. But then my sister sent me a Craigslist ad for a couch, love seat, and ottoman. I looked at the price and thought it was too good to be true. I was practically being gifted all of the furniture I would need in my new home.

After some emails back and forth with the seller, who we’ll call Steve, a friend and I headed out to pick up the furniture. When we arrived and met Steve, the first thing my friend and I noticed were his two Hebrew tattoos across his forearms. We of course asked about them, and learned that Steve was active in the only Krav Maga (Israeli self-defense) class in the State of Mississippi.

This interaction became even more interesting when Steve inquired to what my friend and I did for a living. We gave the simple answer of we are professional Jewish educators who travel around the South as a resource for religious schools. He looked astonished and said something along the lines of, “There is a Jewish organization based in Mississippi dedicated to that?” After helping my friend and I load my truck with the furniture Steve disappeared for a second only to reappear moments later as I was pulling out the money to pay him. He refused to take my money.

“Hey man, I want you to have this,” Steve said. “What y’all do is important and I know what it’s like to move to a new place and furnish a new apartment.”

I was shocked. “You serious, man?”

He nodded. “Y’’all are doing something that is truly impactful, and that’s coming from a Christian.”

Saying I was surprised is an understatement. This man who I had never met before had just given me everything I needed to finish furnishing my apartment. It really was gifted to me! Not only was I astounded at the generosity and kindness of this stranger, but my view of the South was forever changed in that one interaction. I learned that anti-Semitism isn’t something that would be on the foreground of my two years of Southern immersion. Even if folks down here don’t all know a lot of Jewish people, curiosity seems to be the response, not animosity. I feel confident that this early experience is indicative of the norm, not an outlier.

Thank you, “Steve,” for showing me such Southern kindness. 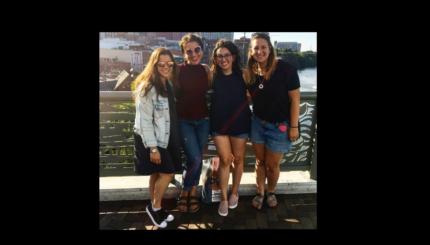