Each April schools across the country observe a Day of Silence, a day dedicated to ending anti-LGBTQ bullying and harassment. While we will be silent on our blog on the 17th, today we are bringing you the voice of one Jewish LGBTQ high schooler who is standing up for herself, her rights, and her community by helping Keshet research Gay-Straight Alliances at Jewish high schools. If you’re interested in learning more about the creation of safe spaces in Jewish schools, watch Keshet’s documentary film, Hineini: Coming Out in a Jewish High School, about the formation about the first Gay-Straight Alliance at a Jewish high school.

Living in Boston there has never been a great deal of conflict between my Jewish identity and my queer identity. I have been lucky enough to grow up in communities predominantly comprised of LGBTQ folk and allies—even my rabbi was a lesbian. My congregation, my childhood summer camps, and my high school have all been centered around being open and educated about the infinite spectrum that is gender and sexuality. These accepting and open communities made it relatively easy for me to explore my own identity.

I’ve always known that a lot of people don’t have access to the kinds of supportive communities that I do. It took me a while to find some of them, myself. Knowing that in theory still rendered my recent work with Keshet to be eye-opening.

My assignment as a two week high school intern at Keshet was to contact Jewish private schools across the U.S. and ask if they have Gay-Straight Alliances. I called almost eighty different schools. Twelve had GSAs. The ones that had them were eager to tell me about the great work their clubs were up to, and their stories were heartwarming! Other schools were less receptive and practically pushed me off the phone after I offered to send more information about our work. Each conversation made me really recognize the personal advantage it was for me to have these open environments in my life.

I have never felt widely oppressed because of my sexual identity. However, there were some points at which I felt lost. For example, middle school was confusing for me because it wasn’t a place where people were especially candid about different types of sexuality. That all changed when I began attending an alternative education high school with a beautifully diverse and open student body. It was here that I first started hearing words like “spectrum” and “non-binary”. This gave me a whole new perspective on the ways that I don’t need to limit my identity. Since then I have developed a whole new kind of confidence in myself about my sexuality.

A school not having a support system for LGBTQ students is a school condemning queer children to a life of confusion and fear. Just having a place to speak is a huge step—I know it has been for me. When you’re not sure why you’re questioning what seems to come so naturally to your classmates, not knowing that you are not the only person who feels the way you do and having your identity entirely dismissed can be quite traumatic.

Having safe and open spaces to talk and hear others talk is vital to the mental well-being of all young adults. All students benefit from hearing from a wide range of experiences, not just those of people who are straight and cisgender.

For generations we’ve lived in fear of what it means to feel one way or another if it varies in the slightest from the norm. Teaching young people to be open in the queer world is a step towards developing a more educated future, one of individuals less afraid of themselves.

Keshet is still working to update our list of active Gay Straight Alliances in Jewish high schools. If your school has a GSA type club let us know! 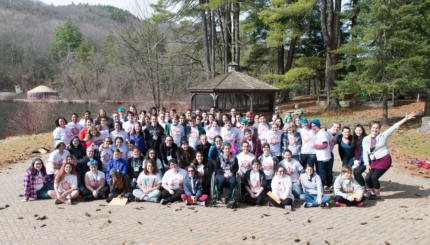 What Happens at Keshet’s Growing LGBTQ and Ally Teen Shabbaton

Creating a space that is radically inclusive, empathic and empowering for those of us who often feel marginalized in our communities.

It is powerful to see yourself reflected in history, in a story, or even in a room. That power is ...