The Shame of Israel

Who Speaks for the Jews?

Should the Jews of Europe move? And if so, to Israel or to America?

“To the Jews of Europe and to the Jews of the world I say that Israel is waiting for you with open arms.”
– Prime Minister of Israel, Benjamin Netanyahu after a second terrorist attack in Europe within just a few weeks.

After an a murderous terrorist attack in Copenhagen, killing a cartoonist, two policeman, and a Jewish man walking out of the main synagogue in the Danish capital , Prime Minister of Israel, Benjamin Netanyahu went to the media and announced that it was time for the Jews of Europe to move home.

“Israel is your home. We are preparing and calling for the absorption of mass immigration from Europe,” he said. “To the Jews of Europe and to the Jews of the world I say that Israel is waiting for you with open arms,” Netanyahu said.

He said these things and I was confused. Anti-Semitism is hideous and frightening wherever it pops up, European anti-semitism terrifies some of us in a unique way – the Shoah (Holocaust) is still fresh in our collective psyche. Part of me thought, “Yes, get out of Europe. Go with Bibi. Go to our Promised Holy Land.” But there was another part of me, a darker, deeper place inside me that said, “Yes, leave Europe, but come here, to America – It’s safer.” These might be the voices you would expect from a duel American-Israeli citizen. But it also speaks to the popular narratives of modern Jewry. Where does Yentl (Barbara Streisand) go when she realizes that Europe, the old country, could no longer be home? America. At the end of Schindler’s List, after having ‘saved’ by Oskar Schindler, the group of Jews come upon a Russian soldier.
“Where should we go,” one of them asks.
The soldier answer, “Don’t go East, that’s for sure. They hate you there. I wouldn’t go West either, if I were you.” And, more or less, the credits roll as we watch the real survivors walk with the actors that portrayed them to place a stone at the grave of Oskar Schindler in Israel.

“I am not worthy of the least of all the deeds of steadfast love and all the faithfulness that You have shown to your servant, for with only my staff I crossed this Jordan, and now I have become two camps.” – Jacob’s prayer before reuniting with Esau who swore to kill him (Genesis 32:10).

There can be no replacement for our home:

כי מציון תצא תורה, ודבר ה’ מירושלים For the Torah shall come forth from Zion, and the word of the Holy Blessing One from Jerusalem.

And yet, we cannot ignore the importance, and historic roll of the Diaspera (those Jews dispersed in lands not our own). Judaism has been deeply influenced by the cultures in which we have lived – Even the Torah was given to us outside of the land, not to mention the encyclopedia of rabbinic thought, the Babylonian Talmud.

Some will argue, but I do not think all the Jews of France and Denmark should leave their homes. Freedom is work standing up for. And yet, and yet. The primitive, fear-driven part of my brain wonders: “Might it be that we have indeed become ‘two camps’ for the same pragmatic reasons that Jacob once divided his family? If one should be attacked, at least the other would survive.”

Keep Far from a Lie

“Keep yourself far from a lie; and do not kill the innocent and righteous; for I will not justify the ...

Should rabbis talk about Israel? In years past, Israel was a subject which united people. You could always count on ... 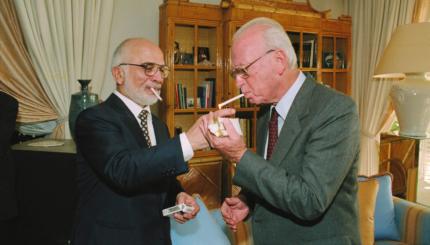