From Every Hill and Molehill of Mississippi

“I have a dream that one day this nation will rise up and live out the true meaning of its creed: “We

hold these truths to be self-evident, that all men are created equal.”

I have a dream that one day on the red hills of Georgia, the sons of former slaves and the sons of  former slave owners will be able to sit down together at the table of brotherhood.

I have a dream that my four little children will one day live in a nation where they will not be judged by the color of their skin but by the content of their character.

I have a dream today!”

Last month I walked the streets of New York City with thousands of others to protest the deaths of Michael Brown and Eric Garner. I cannot believe that over fifty years since Dr. King uttered these words, African American men and women still need to fear being stopped by the police, still suffer unfair treatment at the hands of police and other authority figures, and are still judged by the color of their skin.

Racism is deeply entrenched in our society. As a white person, I could easily ignore this fact. However, I am also a woman and a Jew. These two identities compel me to take note of injustice and to speak up.

As a woman, I know how it feels to be judged by my body and not my mind. I know how it feels to hear words spoken to me, words whose surface meaning hold no malice, but are said with a sneer or inflection that clearly communicates a sinister intent. I know how men can communicate their thoughts about you by a look or a gesture. I know how small these incidents make me feel. I can infer from these experiences how African American men and women could feel in similar situations when race is the issue instead of or in addition to gender.

As Jew, while I now hold a place of privilege in American society, I know that this has not always been the case. I read in the Bible about how we were slaves in Egypt. I study the crusades, the pogroms, and the Holocaust. I hear last week’s news of Jews being killed as they shop in a kosher grocery store in Paris. I may be in a privileged position as a white, American, Jew living in New York. But I feel in my bones the precariousness of that privilege.

So, I cannot stay silent. Like Dr. King, I too have a dream. I too dream that all people, regardless ofskin color, religion, sexual orientation, socio-economic status or place of birth should be accorded the same rights as human beings. We are all human. We all feel pain. We all bleed. We all die. Why, oh why, must people make life even harder by hating each other instead of helping each other? This is something I will never understand. As a rabbi, I feel compelled to speak out. I believe that God created each of us in God’s image. We are all equal, and we must treat each other with the care and concern we all deserve.

In remembrance of Dr. King, on this MLK Day, I pledge to keep dreaming. I pledge to keep fighting for all people to be treated with dignity, respect, and accorded equal rights. This dream must become a reality.

And when this happens, and when we allow freedom ring, when we let it ring from every village and every hamlet, from every state and every city, we will be able to speed up that day when all of God’s children, black men and white men, Jews and Gentiles, Protestants and Catholics, will be able to join hands and sing in the words of the old Negro spiritual:

Confessions of White America: We Have Sinned

This week America commemorates the fiftieth anniversary of the March on Washington for Jobs and Freedom, the massive event in ...

Dreaming About the Powerball Jackpot

Yes, I caught Powerball fever these last few days. And yes, I knew my odds were small (my favorite example: ... 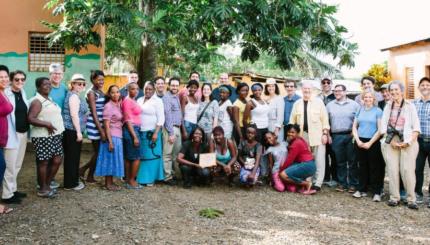 What does it mean to be part of a social change movement?I recently was privileged to learn first-hand one way ...