“Why do bad things happen to good people” is the most fundamental question of theology. Just about everyone has given it some thought in his lifetime. It’s a simple question, and its outlines are more or less like this: If God is indeed omniscient (all-knowing) and omnipotent (all-powerful), and if He is just and righteous as well, why does He permit upright and honest individuals to suffer. It would seem to be a contradiction in terms, and this apparent contradiction has brought many to the brink of despair … and beyond.

The issue actually presents itself at the very outset of the Torah, which we are just beginning to read anew this Shabbat. We are told that two sons are born to Adam and Eve. One of them, whose name is Abel, is presented as a fine, God-fearing man, while God is extremely displeased with his brother Cain and as a result the latter becomes angry and sullen. To make a long story short, Cain ends up killing his brother with no apparent provocation.

Why did God let him do it? The Torah says explicitly that God knew something malevolent was brewing. Immediately before the murder, God says to Cain “sin crouches at the door.” So God is right there at the scene of the crime, and he is totally aware of what is going on. Yet He deliberately refrains from stepping in to prevent the homicide from taking place!

Let’s backtrack for a moment. Put aside the question of why. The fact is that God did not save Abel from his brother’s onslaught. The Torah is telling us straight out that God does not see His role as one of intervening to prevent crime or to protect the righteous. If we use the argument of “why do bad things happen to good people” as a basis to challenge religious faith, we are seriously mistaken, for it turns out that “bad things happen to good people” is actually a fundamental of biblical religion! To put it differently, this tragic story of fratricide is right here at the beginning of the Torah to nip in the bud any potential misunderstanding: God is right here, but He is not here to stop us from harming each other.

And why not? – Well, right after God says to Cain that “sin crouches at the door,” He adds that “it endeavors to gain mastery over you, but you may yet overcome it.” There is a mighty struggle going on with us, and apparently, allowing this struggle to run its course is more important to God than ensuring that human events always turn out justly. This struggle is the source of evil – when we fail to overcome temptation – it is also the very source of all good. It is of the very essence of the meaning of being human. God created us to grapple with the evil inclination and to choose good, and that entails the possibility of us choosing evil. We are given free will to make bad decisions, and it is exactly that option that makes good decisions good. If God were to prevent all evil – thereby stymieing free will – good would lose all meaning. Life would be emptied of its primary significance.

So when bad things happen to good people, don’t ask “where was God?” God was most certainly there. The question to be asked is rather, “where was man?” God was there, providing us with the opportunity to better ourselves through choosing good. It was one of us who dropped the ball.

Do We Find in the Torah Just What We Want to See?

Earlier this month in The New York Times, Reza Aslan continued an ongoing argument against Bill Maher’s blanket condemnation of ... 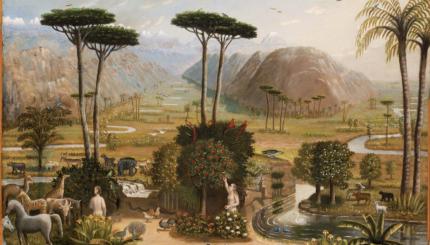 Parashat Bereshit: The Gift of Forgiveness

God created forgiveness before anything in the physical universe because human beings are bound to err.