From Secular Jew to Talmud Scholar Part II: Many Ways to Study Talmud

What!? You Mean Women Can Actually Study Talmud?

Readers often ask: How did a girl raised in a secular socialist family in Los Angeles come to be a Talmud scholar? A good question. But my background didn’t mean I lacked a Jewish education. I attended kindershul, run by Workman’s Circle, instead of religious school. I also learned a great deal about Judaism from books. For example: holidays, rituals, and the immigrant experience from
All-of-a-Kind Family
; the Holocaust and founding of the State of Israel from
Exodus
; Talmud and the yeshiva world from
The Chosen
. From this last book, it was apparent that only males studied Talmud.

Flash forward five years. My husband and I, newlyweds, had moved to Glendale, California, home to one small synagogue, which had just hired a new young rabbi. Seeing a Jewish community with many other young couples, we joined and started attending services as well as adult education classes.

Fifteen years later, I continued to study Torah in English, for my Hebrew skills had not improved much beyond being able to follow along in the prayer book. It was 1992. I heard about a new women’s Talmud class being taught by the feminist theologian Rachel Adler. She had started this class because, despite Southern California having the second-largest Jewish population in the world, there was no place where a woman could study Talmud. Whether one called it excluded, prevented, or prohibited—women didn’t study Talmud.

I confess that I signed up for this class for two reasons. 1. Rachel Adler had such a great reputation that I wanted to study with her no matter what the subject was. 2. I wanted to see why this Jewish text was forbidden to women. After all, as soon as something is banned, it immediately becomes more attractive.

The first class no sooner started than I knew I was way out of my depth. We met around Rachel’s dining table and nearly every other woman there was a Jewish professional, or studying to become one. We used the Steinsaltz Hebrew version of tractate Berakhot. I could barely keep my place, never mind reading aloud. Thankfully our discussions were in English. It took hours of agonizing preparation each week merely to keep my head above water. To my relief, our progress was sufficiently slow so that as time passed, I was better able to not only learn, but to participate.

I discovered that my forte was in rating the proof texts the Talmudic rabbis used to support their arguments. One would think that with the vast number of Torah passages available, the sages would have no trouble finding one to prove any position. Yet some were clearly better than others, and some were surprisingly lame. I learned that the first argument in a halakhic, or Jewish law, debate is a straw man, so obviously wrong that refuting it is easy. The second argument is only slightly better, and if the subject were simple, the third proof would be accepted. A complicated debate might have many more arguments, each supported by a proof text, until the matter is decided.

But not all arguments were resolved in one rabbi’s favor. Sometimes the debate ended with “teiku,” [let it stand], where each sage maintained his position. In other words, they were both right and Jews could legally follow either one. To my amazement, and delight, I saw that Jewish Law in the Talmud encompassed a diversity of opinions.

Talmud became my passion. Every Wednesday night for five years I sat with other dedicated Jewish women as we worked our way through tractate Berakhot. Here I learned the origin of the Judaism we practice today—synagogues, rabbis, observing holidays, our liturgy—things not even mentioned in the Torah where Jewish rituals primarily involve priests, sacrifices, and the Holy Temple.

The class ended when we completed that first tractate. Bereft, it took me some time to accept that my Talmud studies were over. We moved to a new synagogue, and on Rosh Hashana they introduced a woman rabbi who loved Talmud and wanted to teach it to us. My journey, apparently, had only just begun.

The Study of Torah Encompasses Them All

A young man adorned with a black hat, a prayer shawl and phylacteries offers up his morning prayers in the ... 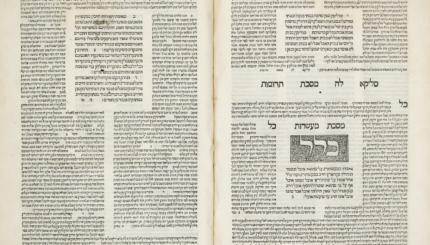 Thinking about jumping into daily Talmud study? Here's some ways to get the most out of it.