Passover: What to Drink!

Growing up, Passover was always my favorite holiday. Not only did Passover provide me with an eight day vacation from my Jewish day school, it also was an opportunity for my family to get together and celebrate the holiday. It probably didn’t hurt that we were also most likely the only family on Long Island that actually enjoyed eating matzah.

My first Passover in college and away from home was horrible. Although I was able to go home for the two seders, it became clear to me that what I truly loved about Passover was the opportunity for my entire family to be home together and take a break from our normal day-to-day schedule for eight days, yet I was spending the majority of the holiday at school. By Passover of my sophomore year, this issue was exacerbated by my new vegetarian diet, which left me hating Passover even more.

However, by my junior year, Passover started having a different meaning to me. That year, I began identifying as a humanistic Jew and started thinking about each Jewish holiday’s significance to me, as a queer humanistic Jew. Before, Passover had been important to me because it was an opportunity for me to spend time with my family for eight days. However, I had never really engaged in what Passover, the holiday and story, actually mean to me. Now when I think of Passover, I think about overcoming oppression. Because that’s ultimately what the Passover story comes down to: an oppressed and enslaved people overcoming obstacles and being led to freedom.

As a queer individual, this narrative especially resonated with me.  We live in a world where queer people are oppressed: by a heteronormative society that erases our existence, by laws that dictate that we are lesser than our heterosexual peers, and—at times—even by ourselves and our own internalized homophobia. However, unlike the People of Israel in biblical times, we cannot wait for plagues or a super natural being to free us from our oppression; we must be our own saviors.

Since Passover of last year, we have made significant gains for LGBTQ Equality.  In June of last year, the Supreme Court struck down part of the Defense of Marriage Act and Prop 8 was finally put to rest. In addition, nine states welcomed marriage equality in 2013. While there are reasons to celebrate, there is still a lot more that needs to be done.

The People of Israel’s departure from Israel did not signify equality and freedom for all. Women were still less equal then men and slavery was still condoned by the Torah. Not everyone who was granted freedom when they left Israel received the same amount of freedom. As we gather to celebrate the story of Passover, it is important that we celebrate the successes of the last year. At the same time, however, it is important that we recognize who is benefiting the most from these successes and who still has the farthest to go. The transgender rights movement is still lagging significantly behind the LGB equality movement. The same summer that parts of DOMA were struck down, key parts of the Voting Rights Act were also struck down. And women, on top of many other obstacles, continue to earn significantly less than their male counterparts.

The fact of the matter is, all issues are queer issues. We cannot fight for queer equality without fighting for trans equality and racial equality. As long as females and people with disabilities are oppressed, so too will segments of the queer population be oppressed. As Passover comes and goes, let us pledge to not just fight for the issues that the mainstream LGBTQ movement has prioritized but for equality for all. In just the past year, we have managed to overcome and break down several oppressive institutions, but we cannot stop until all people, regardless of identity, are truly equal in this country. 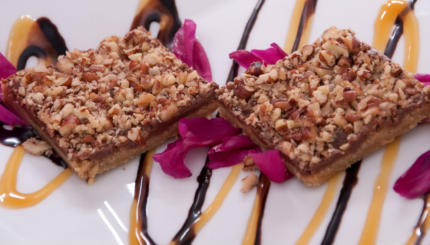 These toffee squares are a part of my family’s yearly Passover repertoire. After eating them at a close friend’s seder ...

Why Israelis have just one seder, how Gibraltar does haroset and other curiosities of this 8-day holiday.

How to Make Your Passover Seder Inclusive

Tips for making your non-Jewish guests and family members feel welcome and comfortable.