This modern Passover Miracle story is perfect for sharing with friends and family at your Seder.

At Passover, every person is supposed to feel as though he himself left Egypt. For me and the Jewish community of Uganda, we do not need to imagine. In our lifetime, we were rescued from ‘slavery’ and saved by divine intervention in order to celebrate.

When Field Marshal Iddi Amin Dada took power in Uganda by way of the gun in 1971, he outlawed Judaism and confiscated our synagogues and most of the Hebrew books. Practice of Judaism was punishable by death. He was a modern day Pharaoh. He gave the community two alternatives, either to convert to Islam or Christianity, or remain unaffiliated. He murdered anyone suspected of opposing his rule and judicial executions were the order of the time. Many Abayudaya feared for their lives and converted to the two majority religions, Islam and Christianity. However, things did not go well for the Christians either. The Archbishop of the Church of Uganda was run over by army trucks in a stage-managed accident; and the chief Justice, who was also Christian, was shot dead on Amin’s orders.

Growing up during this era was a hard pill to swallow. Adults and children would shout insults at Jews and no one did anything to stop them. We were not permitted to wear any Jewish symbols including kippot. Nor were we allowed to appear anywhere near the synagogue premises. We dared only to pray and learn under the cover of the night in our bedrooms. My father, Rabbi Yondav Keki, was caught studying Torah in the Sukkah that he had built in the back yard of our house and only survived after the arresting officer demanded a bribe. Three leaders of the community, including Yaakov Were and Yaakov Kasakya, were arrested and tortured for collecting iron sheets that had been blown off the roof of the Moses Synagogue in Nabugoya.

In that same year when a hijacked plane full of Jews was held at Entebbe by Palestinian terrorists with the permission of Amin, a fast was secretly declared and silent prayers were conducted, each family praying in their bedrooms. The daring rescue of the hostages gave hope to community members that soon or later Amin would go.

This came to pass on Wednesday 11, April 1979, corresponding to 14 Nisan, 5739, Erev Pesach when the new Government, comprised of Ugandan rebels and Tanzanian troupes, declared freedom of worship. This was considered a miracle from above and was celebrated in a special style. More than four cups of 80% proof Uganda banana wine were served making everyone excessively happy by the end of the Seder. No more than 300 of the nearly 3,000 earlier members remained steadfast and loyal to Judaism, which makes me think that had Amin’s regime continued for another five years, the community would not have survived.

Passover remains a special moment for all us. I will always remember my first Seder ever. It is amazing that the reign of terror ended and that freedom of worship was reinstated at the season of freedom. Each year as the community grows, Passover is the moment that we celebrate both our ancient and modern freedom. With the help of Jews from around the world the synagogue that was destroyed is being rebuilt to be better and stronger than ever and the numbers of our community have nearly returned to their earlier size. That Uganda would have been a Jewish state had Herzl’s proposal been successful, that the hijackers chose Entebbe airport as their final resting place, and that Amin like Pharoah was humiliated on the Eve of Pesach could not have simply been a mere coincidence. It was our Passover miracle. 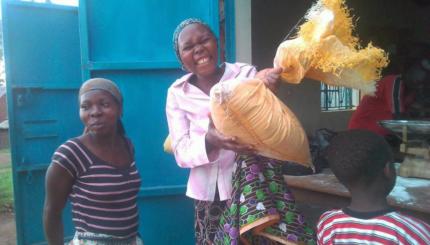 A kippah inspires a bar mitzvah boy to reach out and reach in.

“Be kind to fans of “The Good Wife” today,” CNN extolled, “They’re seriously struggling.” The New York Times weighed in. ...

Yes, it’s true. The Chief Rabbi of Uganda has been elected to parliament in his home country. A remarkable feat ...