Why Thanksgivukkah Is Important For Jews And Non-Jews Alike

Why Thanksgivukkah is Good for Hanukkah and Good for the Jews

Thanksgivvukah, the rare convergence of American Thanksgiving and Hanukkah, has been a mechayeh—a revitalization.

Maybe even a re-dedication, which is the literal meaning of the word Hanukkah.

Do you know how challenging it can be for rabbis, teachers and writers to come up with a new Hanukkah insight every year?

This year, the blogosphere overflows with creative teachings.

Aren’t change and creativity part of the fun of celebrating a holiday year after year? It’s great to return to the candles, singing, latkes, and the story of the Maccabees. And it’s also great to make a new menorah, learn new songs, try new recipes, and retell the story in a different way.

Actually, retelling the story in a different way is a very old tradition. Neither Thanksgiving nor Hanukkah has clear foundations in recorded history. Our very earliest descriptions of both holidays offer multiple interpretations.

William Bradford describes the great bounty at Plymouth: fish, fowl, and Indian corn. Yes, folks, he says, all those letters home about how great things are in the New World are true.

Edward Winslow explains that one day the Englishmen were out playing with their guns. The local Indians, though bound by a formal peace treaty, came to investigate. Everyone went hunting together, and then feasted for three days.

William Hilton affirms the natural abundance and the good relationships with the local Indians, but tells a harsher truth. Members of the English colony “were sick and weak, with very small means.”

No wonder some people use Thanksgiving to celebrate multicultural cooperation; while others focus on abundant feasting; and still others count their blessings, simply grateful to be alive another year. Each theme is a part of the original story of Thanksgiving, depending on which original story you follow.

When it comes to Hanukkah, there are no eyewitness accounts written in 164 BCE. We do have two works, dated 100 years later, that we call Maccabees I and Maccabees II.

Maccabees I gives a political account of events. Alexander the Great was tolerable as conquerors go, but one of the local Syrian Greek rulers, Antiochus, was not. Antiochus was a petty tyrant, and the Judeans, led by the Hasmoneans, successfully rebelled against him. The Hasmonean military leaders restored the Temple, lit the menorah, and gradually took over the priesthood.

Maccabees II gives a conservative religious account of events, showing the hand of God behind the political history. The Judeans had fallen away from true spiritual practice, activating Divine wrath. Thus, God allowed Antiochus to invade. But Judah Maccabee called the Judeans back to true worship; God’s anger turned to compassion; and the Judean forces were victorious.

Five hundred years later, the Talmud introduces a new detail not found in either book of Maccabees. When the Hasmonean forces tried to restore the Temple, they found only one jar of pure oil, sufficient for only one day’s lighting. They lit the menorah anyway and through a miracle, the oil burned for eight days. The holiday was established to commemorate the miracle.

The usual teachings about Hanukkah are based not in fact but on these highly creative accounts. Hanukkah reminds us to gather political strength under oppression, to remain culturally true to Judaism, to know God performs miracles when we need them, and that the light of our soul shines bright even when hidden by difficult times.

Knowing how flexible the meaning of Hanukkah has always been, I am enjoying Thanksgivukkah teachings with no guilt whatsoever. The convergence has brought into focus a wonderful set of possible meanings for Hanukkah.

Thanksgiving is about gratitude; so, too, is Hanukkah. Hanukkah is about being Jewish, and being Jewish means being grateful. Our name “Jews” comes from the Biblical name “Judah,” which means “gratitude.”

Thanksgiving celebrates the harvest. So, too, does Hanukkah. The original eight-day celebration of a restored Temple was modeled on the eight days of Sukkot, the Jewish harvest holiday. Sukkot, taught the prophet Zechariah, could be shared by all cultures and religious traditions.

Thanksgiving is a deeply meaningful cultural event that cuts across religious and ethnic divisions. So, too, is Hanukkah. The themes of gratitude and hope are deep spiritual experiences for religious and secular Jews alike.

Thanksgivukkah reminds me how flexible Jewish tradition has always been in helping us find meaning. Perhaps that’s my favorite teaching of all.

On their surfaces, Hanukkah and Thanksgiving are simple holidays.  We see the themes of light breaking through the darkness, a ... 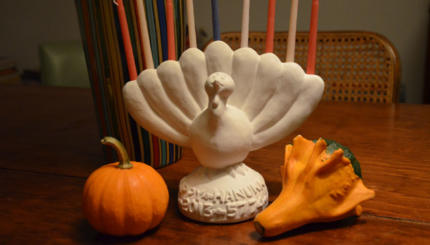 Win a Free Menurkey! Thanksgivukkah Giveaway is ON.

The Nosher and Jewniverse have teamed up to present the most exciting autumn raffle of 2013: The Ultimate Thanksgivukkah Menurkey ...

I am so excited Hanukkah and Thanksgiving decided to team up this year and give us the ultimate holiday: Thanksgivukkah! ...