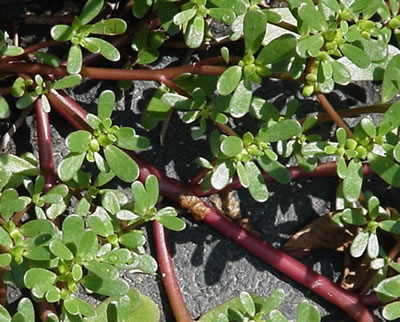 Today’s lunch included stir-fryed Purslane. Until two weeks ago, I’d never heard of it or, to my knowledge, tasted it before. It is one of more unusual items available from the CSA (community supported agriculture) that we signed up for this Summer. I love our CSA. Unlike many programs, which provide you with a box of pre-selected items, our local farm allows you to choose your own, based on a point system, so that you can create your own weekly combinations.

I’m blessed to be living in a part of Central MA where there is an abundance of local farms. Many offer CSAs, and there are also many local farmers’ markets. Our town has a weekly market where the offerings of several local farms can be found, including meat and eggs, local wines, cheeses, and a local, small scale bakery.  Farmers’ markets may not be the cheapest way to shop, but a season’s worth of fruit and vegetables from a CSA is quite economic. Both offer an opportunity to bring a different kind of mindfulness to the buying and eating of food.

Two years ago, inspired by the collection of essays edited by Rabbi Mary Zamore, ‘The Sacred Table‘, my partner and I began to have a different kind of conversation about the food we ate, and particularly about Kashrut. I’ve been talking about the concept of ‘Eco-Kashrut’ for a very long time. I taught about it when I was a Hebrew school teacher in London back in 1990, having read Rabbi Arthur Waskow’s early writings on the topic.  Yet, while I had somewhat inconsistently tried to bring environmental awareness to my food shopping choices, I hadn’t really developed personal practices that I was happy with. I still haven’t – it is a work in progress.

After reading Zamore’s book and, more recently, ‘The Omnivore’s Dilemma‘, I was propelled to make some different choices.  I grew up in a home where we kept kosher and, until very recently, have continued to keep a fairly traditional form of kashrut in the house. Certainly, within the Reform movement, I would be in a minority in maintaining any observance of traditional kashrut laws – early Reformers often dismissed them as a ritualistic practice that had no truly ethical or rational basis, and served to separate us from the non-Jewish host population. While I’ve not necessarily found the Reform argument persuasive (it would have been more persuasive if, simultaneously, the movement had offered up a thoughtful, ethically-based alternative), the contribution of The Sacred Table, a publication of the CCAR (Central Conference of American Rabbis – the Reform rabbis), provides that very alternative.

The more that I have studied and learned, the more that I am troubled by the Kashrut industry. There are those who are doing good work to try and provide a path for observant Jews that is both traditionally kosher and ethically viable, with the Conservative movement leading the charge on providing a ‘hechsher’ (a stamp indicating kosher approval by an authorized team of rabbis) for foods that meet both kosher and ethical standards. But there is a long way to go before such an approach gains much traction among the majority of the kashrut-observant.

And so, for the first time this past year, I have started to move away from some of the kosher observances in our own home toward choices that, upon deeper consideration, offer something that feels ethically and environmentally grounded.  We’ve started with the CSA and an attempt to buy more from local sources more of the time. We’ve cut down on meat consumption considerably, and will buy non-kosher meat too. Last Thanksgiving, our local, free range turkey was sourced from a small scale farm less than 50 miles from our home. And we try to buy fish that is from the ocean and of a kind that is not currently at risk but sourced sustainably.  Its an imperfect system – nothing quite covers all of the bases, and we’re not yet consistent in our choices. But as I head back to the CSA tomorrow to try something new that, perhaps, I’ve never tasted or cooked before, I believe that I’m making progress, and I’m thankful to others who have been working hard to bring conversations about food, ethics, and the environment into the Jewish arena.

The person who makes sure a restaurant or food producer complies with Jewish dietary laws.