When I Think of Passover, I Think About Overcoming Oppression

It was exactly two years ago that I opened the door to a meeting of the Keshet Beit Midrash for the first time. I had moved to Boston a few months previously and, as Pesach (Passover) drew closer with its promise of spring around the corner, I was feeling the sting of isolation in the dead of winter in a strange city where people can’t pronounce their own French last names and nobody says good-morning. I had moved here from Louisiana in search of place to call home.

It was in that room that our small group, in honor of the approaching Passover, examined a passage from
Torah Queeries
. We read a piece written by Jason Gary Klein in hevruta (pairs) and discussed the ritual of storytelling, which Klein notes happens in a very ritualized way at the Passover seder, and which also happens less formally but with equal frequency in queer circles, where we are so fond of telling coming out stories. And, as Klein pointed out, our own narratives of oppression and liberation nicely parallel the story we tell each year at the Passover seder. During the discussion, my first time ever sitting among other queer Jews, I felt cogs turn in my brain that had been rusty from years of disuse. I felt sinews in my heart grow taut that hadn’t been stretched in a lifetime. I didn’t understand those feelings at the time, but in the two years since that beit midrash, I haven’t stopped thinking about our topic that night.

Storytelling is an incredible feature of the human animal. We are unique creatures in many ways, but it is our capacity to translate experience into memory, and then to transmit that memory to another through the act of storytelling that strikes me as nothing short of magic. We can know things that we have not ourselves experienced. This is how humans empower one another, how communities make each individual member stronger.

If you ask a neuroscientist, they won’t use the word magic. But they might tell you something surprising nonetheless. I was introduced to the work of neuroscientist Joseph LeDoux through NPR’s RadioLab hosts, who interviewed him for an episode on memory and forgetting. According to LeDoux, scientists have known for decades that memories are physical entities. When we store a memory, we are folding a tiny sequence of proteins in our brains. Our memory is like a giant linen closet. And each time we pull a memory off the shelf, we fold that protein chain a little differently before putting it back. That’s a stunning piece of neurology, that every time we recall an experience we alter it slightly.

As shocking and, frankly, disheartening as that may sound, Jews should know this to be true. Every year at the Passover table we change the story of the Exodus, sometimes with minor revisions, sometimes with wild reinterpretations. In the queer ritual of storytelling, our stories change a little every time, too. One thing that I have realized in telling my own coming out story is that it’s never a complete process. Every year I learn a new piece of the puzzle, an aspect of identity I hadn’t understood before.

The process of storytelling — the process of remembering and revising — is in fact a fundamental function of community. It allows individuals to refold experiences anew year after year. If we are, as John Locke claimed, the sum of our memories, then we change not only the story but our individual selves every time we remember the Exodus. We fold that protein chain a little differently than the year before. Our brains are literally changed by the process of storytelling.

It is significant, then that it is God who tells us to keep telling the story. In Exodus we are commanded again and again to tell the story in each generation. If you believe in an omniscient God, then surely God knew that revisions are inevitable every time the human brain uses a memory. It follows, then, that God must see some advantage in an ever-changing, unstable storyline. God wants that slight alteration in proteins to take place in our brains every time we gather in community. That is part of the dazzling sum of who we are.

When we remove ourselves from community, we lose the forum for storytelling and with it, we literally lose a piece of ourselves. Our community’s memories are absent from our brains and our own stories stay static, fixed, and lifeless. Without community, we halt the process of refolding. This is the devastation of isolation, that we become helpless to assemble a cohesive story line out of memories. Our Lockean identities are an absurd stream of consciousness, missing integral pieces. We are a linen closet in total disarray.

This is one reason that I’m thankful to have queer community this year at Passover, and year round. Just as the storytelling at the seder is an integral part of Jewish identity-making, so is queer storytelling to a queer identity. The pieces of others’ lives that I’ve heard have been stored in my physical brain and have literally become a part of me. Every Keshet Shabbat, every queer beit midrash, every community event, has been its own small queer seder. The story of the Exodus teaches us that simply leaving an oppressive land is not enough. Even liberation itself is not enough. It’s the storytelling that makes the people. It’s the continual refolding of memories that makes us who we are. When I walked through the door of the beit midrash, I was looking for community. I had no idea that I would also find missing pieces of myself.

As a Jewish blogger and editor, I always say that the period leading up to Jewish Book Month is one of ... 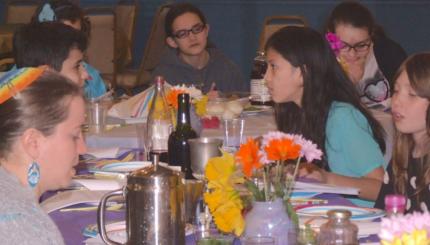 I love Passover.I love spending time with my family, I love the food, and I love that we have a ...