Jews read sections of the Torah each week, and these sections, known as parshiyot, inspire endless examination year after year. Each week we will bring you essays examining these portions from a queer perspective, drawn from the book Torah Queeries: Weekly Commentaries on the Hebrew Bible and the Torah Queeries online collection. This week, Joy Ladin, Gottesman Professor of English at Stern College and Keshet board member, explains how Rebecca, at the well, models the Torah’s unique brand of radical independence. Joy’s recent memoir is titled Through the Doors of Life: A Jewish Journey Between Genders.

After burying his wife Sarah, the aged Abraham summons his servant Eliezer and makes him swear to leave Canaan and return to Abraham’s homeland to find a wife for his son Isaac. Eliezer prays that God identify the right woman by having her offer water to him and to his camels.

Eliezer presumably chose camel-watering as a sign of Divine approval because it went so far beyond the code of hospitality that it could be motivated only by hesed, loving-kindness to a stranger and to animals. Given how much camels drink after a long journey through the desert, watering a caravan-worth is like filling a swimming pool with a bucket. That not only takes kindness; it takes the strength, determination, and independence necessary to turn kindness into action. Rebecca is there to draw water for her household; Rebecca’s kindness to Eliezer means that her own family has to wait for the water they, too, need. She risks her family’s anger to fulfill her own ideas about the proper treatment of strangers and animals.

Since Eliezer will soon ask her to leave her family and journey with him to an unknown husband and life, the independence Rebecca shows is a crucial quality. Many young women wouldn’t want to leave their families for a man they’d never seen. Rebecca is not only willing to go into the unknown; despite the understandable misgivings and sentiments of her family, she’s ready to go right now. Rebecca’s independence of family and cultural norms is an essential aspect of what makes her Matriarch material. Many years later, it enable her to defy Isaac’s will and every tenet of cultural morality by encouraging her younger son Jacob to steal the blessing his blind, aged father had reserved for his older brother Esau – and thus to ensure that Jacob would become the bearer of the Divine blessing that the Torah portrays as the fructifying spark of Jewish peoplehood.

One of the obstacles to reading Torah from a twenty-first century perspective is that the Torah radically diminishes the significance of individual human life. Characters appear and disappear in a sentence; even the most prominent tend to be gone after a couple of chapters. Even Eliezer, who is the subject of almost an entire chapter, comes out of nowhere and vanishes the moment his errand is completed. His life, and even Abraham’s, are not portrayed as important in themselves; they are means to an end: making God visible in and through the human world. No one life, no one generation, is sufficient for this process; in the Torah, God becomes visible through accretion, and the narrative strips away every aspect of life that doesn’t contribute to this visibility.

But as depressing as the Torah’s God’s-eye perspective on human life can be, the narrative terseness that pares individual lives down to nearly nothing also gives individuals a radical freedom to transform themselves – and it is in that freedom that God becomes visible. In the five books of Moses, no one – not Abraham, not even Moses himself – is identified from birth as being destined for a particular role. Abraham one day hears God’s voice telling him to leave everything he knows and go to a land he’s never seen – and he goes. Rebecca is moved by the sight of a thirsty stranger and ten thirsty camels, and turns herself into one of the mothers of the Jewish people. The Torah doesn’t tell us that God told her to water those camels; Eliezer’s prayer is fulfilled, the Jewish future established and God made visible, because Rebecca has the strength of heart and hand to be true to her kindness, and the courage and independence to turn her back on her old life and head into the unknown. And while Abraham at least had the voice of God telling him what he should do and offering him rewards if he did it, Rebecca was lead into the loneliness and danger of an unknown future by nothing but her own determination to live. That makes her not only a mother of the Jewish people, but a mother of all of us whose insistence on being who we are leads us into lives that may baffle and enrage those around us. And it makes the Torah a book that, despite its archaism, sexism, and trans-, homo– and xeno– phobia, summons each of us to make God visible in the world by doing whatever it takes to become who we are. 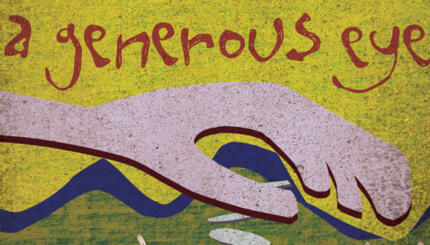 The Torah is strewn with transgendered hearts. How can that be true? The Torah, as we know, is not written ...