Why Gwyneth Paltrow’s Conversion to Judaism Will Confuse People

Which Judaism is the Authentic One?

But why would they choose Judaism?

This is a question I hear often. In my work helping to celebrate the racial and ethnic diversity that is endemic to the Jewish community, I also have the privilege of connecting with many people who have chosen to become Jewish. In Jewish tradition, when someone becomes Jewish the community is meant to accept them as they are, not to dwell on their status as a convert. Yet often, converts are met with curiosity or worse, suspicion. From Jews by choice, I hear that this can often feel like personal rejection.

Whenever I am asked about why people choose Judaism, I recall late night dorm conversations I had as a college student. A good friend was studying to be a cantor. He had grown up in Europe, in a country without a strong Jewish past, in a family that had no Jewish past. A chance encounter with Jews on Purim pulled him into the Jewish orbit and eventually he made the choice to make Judaism his own. We spent many hours talking about Judaism, I did not for a minute doubt his commitment or his place in the Jewish people. Nonetheless, time and again, I repeatedly returned to ask him why he had chosen Judaism.

At the time, I was struggling. I had not chosen Judaism and it felt like a burden that I could not escape. While I went through the motions of observance and community, I was pained by so much in our tradition particularly as it related to women’s roles, hierarchy and power. Israel, which had once been the idealized center of my Jewish identity, had given way to the complex realities of adult understanding. My awareness of the legacy of anti-Semitism robbed me of the ability to imagine true security. Why, I wondered, would anyone choose the very thing that on some level I wished I could escape?

There is nothing more that I love about being a rabbi, than hearing those who choose Judaism explain their choice –which they do as part of the conversion process. Jews by choice come to Judaism without the baggage that Jews from birth carry. Time and again, I hear that the ambiguities of Judaism, the very thing that was so challenging for me as young woman, are among the things that newcomers value in Judaism. Just like Jews by birth, they struggle with difficult issues like women’s rights or the State of Israel, but they feel confident that whatever struggles they have fit into the flexible but enduring Jewish framework. Among Jews by birth, I often hear that learning Hebrew was the bane of Jewish childhood. And yet as the member of a conversion board, I’ve heard grown men wax eloquently about the power of learning an ancient language and unlocking timeless wisdom by studying it in the original. In Uganda, where Rabbi Gershom Sizomu has officiated at hundreds of conversions, it is the magic of Shabbat- which allows people to stop work, come together with other, focus on the finer things- which is the most powerful draw. Those choosing Judaism see joy and possibilities. They accept the complexities as part of the beauty of the system they are entering into. Judaism through their eyes never fails to inspire me.

I know that for some portion of the Jewish by birth population it is hard to accept that a person from Scandinavia, the mountains in Peru, or plains of Africa- who does not know about gefilte fish, did not have ancestors forced to leave a homeland, and knows not from Woody Allen- can or should be part of the Jewish people. And this is highly problematic. But often, I think that the questions to converts or to me, as a rabbi who often has the privilege of working with individual converts as well as communities of converts, speak to deep seated ambivalence and struggles, even shame about our own Jewishness. I did in the end emerge from my struggles and find my own answers, but not before I inflicted my own ambivalence and doubt on my friend. Our own challenges and doubts need to be addressed, but not at the cost of making newcomers feel unwelcome.

This summer I had a conversation with a group of sixth grade students at a Jewish school in Buenos Aires. Discussing diversity of Jews  around the world, they fixed on the concept of conversion. They wanted to know what conversations rabbis have with a conversion student when they sit at the biet din, “court” for conversion.I explained that each conversation is unique but then turned the question back at them. Forced to consider what they might say, they came up with some pretty compelling answers: peoplehood, ritual, customs, Israel. But more important than the content was the realization that they had answers for themselves. Ultimately, no matter how inspiring, someone else’s answer about why they have chosen Judaism will never take the place of each Jew finding his or her own reasons to be Jewish. 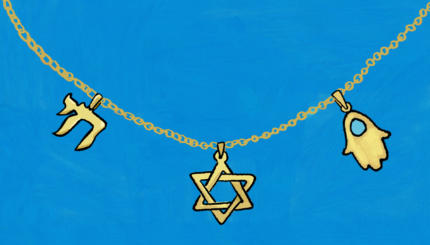 The choice of a new name can represent a declaration of intent to embody a particular Jewish value.

I have been working with a married couple towards conversion. They have completed their learning, their years of living Jewishly, ...

A friend tipped me off to a new reality TV show that was about to begin publicizing its pilot episode. ...