Last Chanukah the world was introduced to the Maccabeats with their runaway hit “Candlelight.” This year another song, “Miracles,” has entered the YouTube universe.

But it wasn’t the song or their new video that drew me in, but their fundraising efforts on behalf of the Gift of Life Foundation through the website www.MakeSomeMiracles.com.

The Maccabeats are inviting donations of ten thousand dollars a day for each day of Chanukah in the hope of securing much needed funds for Gift of Life, a bone marrow registry organization.

With a personal video narrated by Mayim Bialik and each of the members of the Maccabeats, their call is honest and sincere. As of this writing they have already raised $22,000!

I clicked on the donation button. Suddenly, I was involved in making a miracle for Chanukah — not just receiving an ancient one. The miracle that the Maccabeats are giving light to is a miracle that keeps on giving life and hope to people with cancer beyond this holiday season.

So can we make some miracles?

Many interpretations suggest that the miracle of Chanukah was that we didn’t give up even when we had no chance of winning against the Greek/Syrians. In spite of the powerful forces that encourage our continued assimilation or disappearance we have survived and adapted to the modern world in which we live in as Jews. We live precariously on the edge while we persevere through a revolving door of constant change. The miracle of the Maccabeats is the miracle of our people.

We have come a long way from the Adam Sandler’s Chanukah song from “Saturday Night Live” in 1994 which centered on the theme of Jewish children feeling alienated during the Christmas season, and Sandler’s listing of Jewish celebrities as a way of sympathizing with their situation.

With the Maccabeats, the traditional and the contemporary merge to create a blend of Judaism and Jewish music that continues to define our communal confidence with viral velocity.

We revel in religious freedom in America. A Yeshiva University a cappella group has reached beyond their ivory tower borders to educate and entertain. We all received the instant messaging. Again, history has shown us, that we are the miracle of Chanukah!

Yes, we can make modern miracles. Click and contribute to a new miracle this Chanukah 5772!

Hanukkah (the first candle is lit on the evening of Dec. 20, 2011) is the Jewish holiday which celebrates miracles. ... 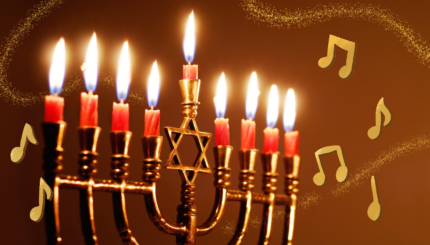 From the classics to the most creative acapella, here’s a list of Youtube’s best Hanukkah music.

Will the Real Chanukah Hero Please Stand Up?

As the eight days of Chanukah wind down, I am thinking of a question I posed as the festival began ...