“What is Hanukah?”  the Talmud asks and typically each year at this time we are reminded by a variety of writers what the “true” meaning of Hanukah is.  From the pages of the Wall Street Journal to numerous websites, scholars, rabbis, educators, and the “man (sic) on the street” offer their take on the nature of Hanukah.  To be clear, many of these pieces are quite engaging and informative and this year I have certainly profited from their insights.

It is in this vein, I want to share an approach of Rabbi Isaac Hutner obm. In one of his teachings R. Hutner suggests that the lasting impact of Greece on Israel was the development of machloket-differences of opinion as to the practice of Torah. The Greeks, through their decrees, caused Torah to be forgotten and it was this forgetting that created differences of opinions as to what the correct practice was and should be. It was the war with the Greeks and their defeat at the time of Hanukah that created the “war over Torah”, the sometimes acrimonious debates in which rabbis and sages engage in order to recover what was lost during the persecutions by the Greeks .  The legacy of Greece is the legacy of the darkness caused by the accurate tradition of Torah being lost. However, this legacy of darkness and forgetting is compensated by the recovery project of the sages, the “war over Torah” which increased the knowledge of Torah itself. Debate led to new understandings and insights. Even the rejected positions had to be justified and explained. The legacy of Hanukah is the increased light of knowledge of Torah overcoming the darkness of the forgotten Torah. It was the forgetting caused by the Greeks that allowed Torah to expand exponentially  in its scope and knowledge.

This rather inadequate summary of my reading of R. Hutner’s teaching I hope will lead the reader to explore it in depth in the original.  To be sure not all agree with R Hutner’s understanding of the origin of machloket– differences of opinion. In the context of his teaching I do want to reflect on “war over Torah”. While the tradition itself hopes and expects that the “enemies” in this battle, who are after all sages, will become “lovers” in the end, there is a danger in intellectual/religious battle that one  go overboard and flex one’s muscles in a way that ventures far beyond a search for truth to a destruction of civility. There are examples of this in the Talmud. We certainly see this problem pervading our own political and religious discourse. Perhaps even in this pursuit of truth we may have to stop sometimes and not use it as a license for slamming those with whom we may have even profound disagreement.

However R. Hutner asserts something that may appear at first as counterintuitive. True love he says only can emerge from those with whom you have disagreement.  Becoming “lovers” is only possible because you had profound differences and were able to engage them in a way that brought you closer in the end. Becoming closer does not mean reaching full agreement, but it does mean having a deep attachment to your ideological opponent.  What might our discourse look like if we retained this as a goal even while maintaining our deep convictions and commitment to pursuing the truth as we conceive it?

Is this true of our most intimate relationships as well? Might it be that learning how to truly argue without achieving full agreement  is what can bring lovers the closest? The answer to that I leave to you, in the meantime Happy Hanukah. 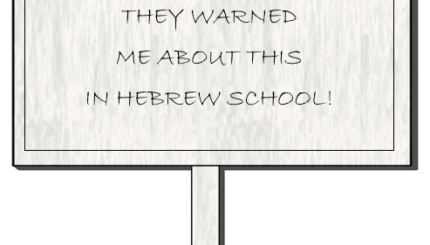 From Sigh to Song: A Way Toward Freedom