The holiday of Passover starts at sunset tonight, right? Not really. In our household, Passover started about a month ago — due partly to the fact that my wife is crazy & obsessive, and partly to the Hasidic idea that you’re supposed to start cleansing the specks of hametz out of your life, both physically and spiritually, thirty days before the holiday starts.

But 24 hours before Passover is when it starts to kick in hardcore.

Come back all day. I’ll be doing my regular MJL day-job from home, but I’ll also be updating with all sorts of crazy stuff that’s going on in my house, in the neighborhood, and in the spiritual realms (I think).

6:30 A.M. My alarm goes off. Tonight the holiday really starts, but today is the Fast of the First-Born. As the designated first-born son, that means that I’ve got to get my butt in action and get to synagogue. Or I could sleep 5 more minutes.

The reason I have to get to synagogue, today of all days, is in order to participate in a siyum, or the completion of a study of a book of Talmud. In Jewish tradition, certain fasts can be alleviated if there’s a reason to have a party. The easiest and most dependable reason to have a party is when someone finishes studying something significant (most commonly, Talmud). If I don’t make it, then I will not eat anything until the seder tonight, when I drink 4 cups of wine — 2 of them before any food is consumed.

Which could make the seder a totally different and wacky experience.

But it also could mean I’d put the pass out in Passover.

6:50 AM. OK, OK. I am going to synagogue. But I really should get dressed first.

8:15 AM. Prayed fast, prayed hard. I called the rabbi last night to ask if there was a siyum at synagogue. He said there was, and also, there was an article about me in last week’s Forward. Which I did not know, and is also an awkward thing to hear — especially when the first sentence that struggles to get out of my mouth is, Do you know anything embarrassing about me now? Yes, I live a weird life. Here’s the rabbi finishing his Talmud volume:

Somebody brought schmaltz herring, macaroons, and Slivovice. (I pass on the herring.) I also get asked if we have any room at our seder. Our seder has ballooned from 8 people to 15, but I say I’ll ask Itta what she thinks. Remind me to do that.

9:15 AM. I run down the street and dump our last chametz trash bags in the public dumpster. On the way back, I see our neighbors, sitting on deck chairs and eating bagels on the porch.

The father waves me over. “You want one?” he says.

I am chametzed out. I am still stuffed from last night, when we had unbelievable vegan heroes at Sacred Chow and I ate enough seitan and legumes and stuff to keep me protein-ified for 14 days of Passover. (Not that being a vegetarian on Passover is hard, but still.) One other thing: They are wearing rubber gloves while they eat. I could make fun of them, but I’m sure they have plenty of things to make fun of me right back. Really, it’s just awesome that they care that much.

10:17 AM. OK, folks. In the general New York area, the last time for eating chametz is T minus zero minutes. (I’m not exactly sure the reason in Jewish law, but I always suspected it was to have enough time to…uh, get rid of it. Gastrointestinally.)

Goodbye, bread. It’s been lovely to know ya. Next up: We burn the last remains of chametz! With fire!

11:01 AM. Today’s Jewniverse is out! Yes, I am actually working, too. I added a last-minute link for this awesome handy handout about how to set your seder plate which we released together with Moishe House and Birthright, and which I really wish I’d printed out when I was near a printer that understood what my computer was saying. In other words: You should print this out and have it near your seder plate. And I will wish I was you.

1:40 PM. After that particularly inspired bit of pyromania (and, by “inspired,” I mean “inspired by Beavis and Butt-head”), I sat down to focus on work for a bit. In my new hametz-free lifestyle, it’s harder to concentrate, since I’m used to chewing with one hand and typing with the other two. Maybe it’s that I need my mouth to be moving, whether I’m talking or writing? I don’t know.

In any case, burning the hametz was fun. My older daughter kept running close to the trash can (I love, love, our Oscar the Grouch-inspired trash can, by the way), peeking in, and then running away, while the baby squashed matzah into the grass a safe distance away. We didn’t need much tinder (just a paper egg carton). Then again, we didn’t have much hametz — just the traditional 10 pieces of bread that we hid around the house last night, wrapped in old newspaper.

Those big scratchy sticks you see are our lulavs from Sukkot. There’s a tradition that you save the lulav to burn today, along with all your hametz. They burned pretty quickly, and let out a smell like sage, which was a nice contrast to that smoky, lung-clogging malodorous odor that you’d expect. (We save our etrogim, by the way. They dry out nicely, and they look sort of like the etrog equivalent of dried flowers.) 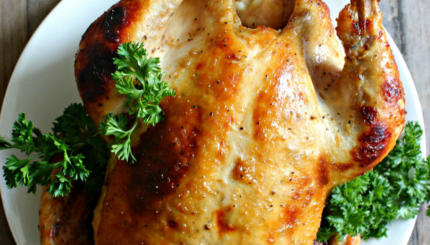 Subtly spicy, sweet, and a perfect main course for Passover, or anytime.