As a kid, I remember having a bunch of books about Jews in sports. The books would tell stories about the heroic feats of all the greatest Jewish athletes of decades past. I guess because of either a lack of talent or some poor editing, Bobby Fischer was always included in these books.

Why was Bobby Fischer considered an athlete? Was it because the Book of Jewish Nerds was already onto its 149th edition, and there just wasn’t any more space? I mean, if you are a good chess player, seriously, good for you. You are smarter than me and probably most of my friends (especially most of my friends). But an athlete? Let’s just say there aren’t any plans for steroids testing in chess anytime soon (ACTUALLY! That’s a lie. Check out this link! Please let this story be true).

Of course, it was only years later that I realized that Fischer shouldn’t have been in those books. Not so much because he wasn’t an athlete, but because he was a crazy person. Not like Lady Gaga crazy. Flat out, mental institution crazy. He really shouldn’t be included in any discussion about heroic Jews.

As some of you may remember, Fischer, who was exiled from the U.S., died a couple years ago in Iceland. But Fischer left behind over 2 million dollars, and (because he is a crazy person), no will. And as you can guess, there is now a fight to see who will get the money.

One person who is claiming the money is a 9-year-old girl from the Philippines, who’s mother claims that Fischer was her father (why anyone would sleep with that man is beyond me. Look at that picture! Was that taken before or after he died?!?!). And in order to figure out if she actually is his daughter, they are digging up his grave to do a DNA test.

I know what you are all thinking. And don’t worry, I’m one step ahead of you: 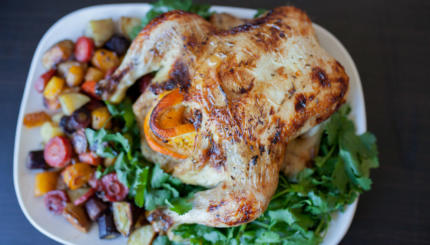 One Pan Roast Chicken with Potatoes and Carrots

Moist and flavorful inside, crispy outside plus a side dish — all combined in one pan.