Would You Host Your Own Living Funeral?

According to Jewish law, before one eats bread, one is required to wash one’s hands, say the blessing for bread, and afterwards say
birkat hamazon
, the grace after meals. This might not seem like a huge deal, but if you’re serious about it, it can alter your eating habits considerably. Out somewhere and someone offers you a bagel? Great! But what if there’s nowhere to wash your hands? And do you have time to say birkat hamazon afterwards? Also, there’s the question of how much bread requires this whole rigamarole. (Most people say a k’zayit, or an amount the size of a large olive.) And are you eating the bread as a snack, or as part of a big meal? There’s a wide variety of customs about what really requires one to wash and say hamotza, and especially when I was growing up it was fairly easy to find someone who would poskin (rule according to Jewish law) that however much bread you wanted to eat wasn’t enough to absolutely require you to wash/say hamotzi/say birkat hamazon. (The alternative is simply saying a different blessing before eating, mezonot, and a much shorter blessing afterwards.)

I once heard an administrator at my high school claim that half a bagel was less than a k’zayit. I’ve also heard that two slices of pizza, if you don’t eat them as a main meal, do not require washing. A tortilla used in a wrap doesn’t require motzi, but maybe it does if it’s made with white flour. Like I said–it’s complicated.

(Once, I was on a date with a pretty frum guy and we had a picnic, and I knew he was serious about me when he suggested we bring bread, and had a bottle of water specially allocated for handwashing.)

Anyway, I suspect that for a lot of people it often boils down to how lazy they’re feeling at the moment that would require them to get up and go wash. And also if there’s a non-bread possibility that looks good.

I was reminded of this issue while watching the video below–a promotional video for the high school I went to. You’ll notice that in the video they point out the bagels available for breakfast, and also the Corn Pops. The Corn Pops are kind of a joke, and also a kind of insider’s way of pointing out that the cafeteria offers a lot of different possibilities for breakfast, some that require washing, and some that do not.

(Watching this video is one of the more surreal experiences of my life. Imagine your worst nightmare–seriously the worst dream you’ve ever had. Now imagine if someone had made a trailer for that dream, as if it was a major motion picture–and a romantic comedy. You watch it knowing how horrible it’s going to end up, and also knowing that the poor unsuspecting audience has no idea what kind of misery it’s in for should they choose to buy tickets. That kind of what it’s like. Also, the best line is, “Wow, there’s a lot of Torah learning going on around here!” Wow, indeed.) 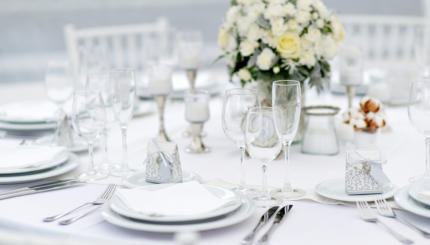 Ask the Expert: Saying a Blessing Over Non-Kosher Food

Can I say birkat hamazon on treyf food?

All about the grace after meals.

Praising God? There’s An App For That

I don’t have an iPhone, so I don’t find myself downloading tons of apps. However, I do have an iPod ...