I’m sure you don’t want to hear about my personal politics (after all, I voted for Buchanan in 2000). So don’t worry. Now is not the time and place for me to call lawmakers in Arizona racists.

There are many things than affect your political beliefs. One of those things is religion. So I guess it isn’t totally out of the blue for someone to have issues with Arizona’s new immigration laws based on their religious beliefs. But if you’re going to do this, make sure your beliefs make just a little bit of sense.

I’m sure that Amar’e Stoudemire of the Phoenix Suns is a nice guy. He plays hard most of the time. He is a physical freak of nature. But an academic? I think not.

Last night, the Suns, in solidarity with Arizona’s Latino community (and because it was Cinqo de Mayo), wore “Los Suns” jerseys. Here is Amar’e’s explanation on his twitter account.

This kind of seems out of the blue. I’d never really heard that Hispanics are actually the tribe of Asher. Luckily for me, the fine people at Deadspin were quick to do some research on the Lost Tribes of Israel. And the only real answer they came up with is that the Israelite Church of God, which is an offshoot of the Black Hebrew Israelites, believes that Hispanics and Natives are both descendants of Israel.

Who knew that Amar’e was such a scholar? 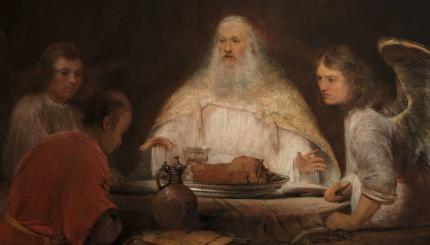 Christianity and Islam share a reverence for Judaism's patriarch.