Rafael lives in 15th-century Spain. His father, Don Fernando, is the conductor of the Barcelona Symphony. But their family harbors a dangerous secret: They are Jewish conversos, 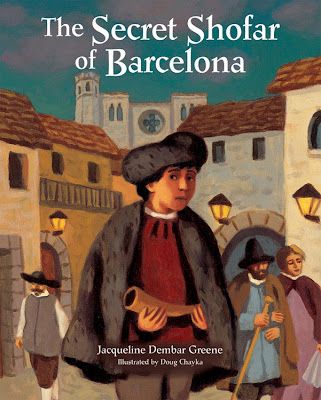 forced to publicly convert to Christianity in order to keep from being exiled or killed.

Of course, this is all just background. The Secret Shofar of Barcelona — a new picture book written by Jacqueline Dembar Greene (better known as the author of the Jewish “American Girl” books) and illustrated by Doug Chayka, is a good-natured story for young children about a boy growing up in the Spain of the Inquisition.

He and his family remain secretly Jewish, though, and any time that they venture to perform a Jewish ritual — whether it’s lighting the candles on Friday dinner or blowing the shofar on Rosh Hashanah — it must be done covertly.

When the rest of the universe thinks you’re not Jewish, however, some things get overlooked — like Don Fernando’s being commissioned to perform a new symphony on the first night of Rosh Hashanah, which must be performed live for the local Duke. The rest of the family frets and worries. Or, at least, they do until Rafael devises a plan so that the whole family might hear the sounding of the shofar.

I won’t give anything away — not that it’s that hard to guess, of course. The plot is even and nonchalant. Perhaps it’s a little too nonchalant, considering that we’re dealing with one of the most horrific periods in Jewish history. The attitude that Rafael’s parents and their friends have when secretly expressing their Judaism seems a lot less daring than most of the literature would have you believe, with prayerbooks strewn around the house as the adults schmooze in the drawing room.

But the book’s treatment of the everyday actions of conversos is still both realistic and chilling. The narrative gets you solidly into the head of a young boy and his time period, and over comparatively few pages, it builds an effective world. The art is a little fuzzy and baroque for kids, but it’s bright and colorful and vivid, and the style has that otherworldly quality that makes it feel like the book is a window to another century and country.

With the onset of Rosh Hashanah, and as us Jews who live in free countries blow the shofar to repent, The Secret Shofar of Barcelona is a very different kind of warning — not just of what it means to be Jewish and free, but also of how to separate the very real fears of human danger, whether it’s being hit by a car or running from the Inquisitors, from the fear of God that we try to connect with on our way into the High Holiday season.

This morning in MJL meeting-land, we were talking about the difference between teaching adults about the High Holidays and teaching the subject to children. The one thing we all agreed on was that, for children, different things are important…but it’s just as important not to “lighten” it or dumb-down the ideas. This book does a masterful job of it, focusing on the smaller details in order to portray the bigger picture. And what a picture it is.

It’s not that hard to play the shofar. Believe me, I’ve led enough High Holiday kids services in my life ...

This post came our way courtesy of Alan Jay Sufrin, singer/guitarist/bassist/keyboardist for the band Stereo Sinai. He’s also the official ...

A History of Illegal Shofar Blowing

Did you know that when the British were in charge of Palestine it was illegal to blow a shofar or ...