If you haven’t schooled yourself on
The Goldbergs
— one of the first American sitcoms, a virtual one-woman show created by writer/producer/director/star Gertrude Berg, who won the first Emmy Award for Best Actress ever given — there’s no better time than now to start. 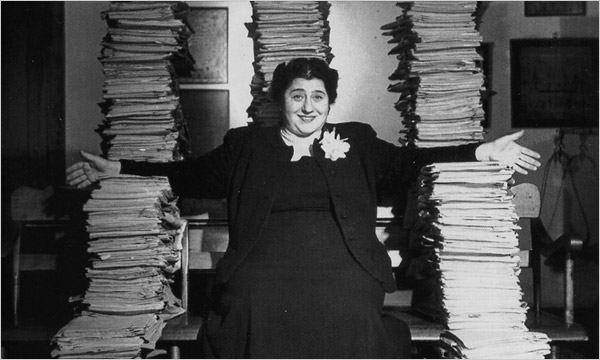 For one thing, MJL just posted its history of The Goldbergs. It’s a series that was on the radio for the better part of two decades, and television for five years — and, today, barely anybody knows about the program. Hey, I didn’t even know about the existence of The Goldbergs until I was halfway through writing a book about them.

The new film Yoo-Hoo, Mrs. Goldberg doesn’t do penance for this oversight, but it’s a great place to start. Documentarian Aviva Kempner’s previous film, The Life and Times of Hank Greenberg covers the same time period and territory — that is, the early 20th century, where Jews have already come over to America in large numbers and are just starting to deal with the question of what it means to be here. It’s that question, and the various answers that are posited, that Kempner manages to express so eloquently.

If Yoo-Hoo has any major flaws, it’s that it doesn’t dwell long on the actual Goldbergs series. While Berg was a wild, compassionate, and multi-talented character — she was a writer/director/actor “triple threat” before a label existed for such things — so much of her public persona came from Molly Goldberg that it’s hard to minimize the fictional Goldberg’s influence on the real-life Berg. As Berg was fond of saying, she spent more time in her day writing, acting, and talking about Molly Goldberg than she did being herself.

That’s not to say that Berg’s struggle with her identity, as well as the struggle with the identity of her most-prized creation, don’t come across in the film. It’s exceedingly hard to follow the narrative rule of “show, don’t tell” in a documentary, but Kempner accomplishes it masterfully. One scene, which combines file footage of Berg showing a TV interview crew around their house with Adam Berg talking about his grandmother’s spending habits, it paints a picture that’s both understated and incredibly vivid. Berg was both a modern, material woman and a first-generation American, and she combined the two in a personality that was equal parts regality and awe — almost as if she couldn’t believe the life she’d stepped into, but still wanted to do it right.

With a rollicking pace and a bunch of different voices, the film feels almost like an episode of The Goldbergs, telling a story that’s warm and funny and existing just on the verge of believability…but always with that undercurrent of wonder that keeps you not just invested in the story, but cheering for the characters.

A bunch of first-person accounts — from Berg’s biographer and grandson, as well as some of the original actors and random people, among them Supreme Court Justice Ruth Bader Ginsburg, recounting their own memories of listening to the Goldbergs — round out the documentary. There’s also an

awesome slate of guest appearances — including the director, Aviva Kempner, as well as Mrs. Berg’s grandson (who appears in the film, and tells some great stories), and the granddaughter of the actor who played “Uncle David” (of course) — to go with screenings of the movie.

It’s not an exaggeration to say that virtually every television show that’s come after The Goldbergs, from the faintly Jewish tone of anti-Semite Archie Bunker’s kvetching to the wacky plot twists of Full House and Arrested Development, bears in some way the genetics of its Jewish ancestor. When I wrote my own novel about a TV sitcom centered on a Jewish family, I called the book Never Mind the Goldbergs and the fictional TV show The Goldbergs–in the words of one character, it sounded “Jewish, but not too Jewish.” I only learned halfway through writing that there already was a sitcom with that name. After contemplating changing the title, I decided to leave it untouched–both as an homage to the show that I never knew about, and as an homage to the idea that I’d somehow already connected with.

Looking at Judaism on the small screen.