What Makes a Fish Kosher?

When we hear the word pickle, most of us think of cucumbers — brined, shriveled, sour, cut into chips and floating alongside red onion half-moons and tomato slices atop a deli sandwich. When my class visited New York in fifth grade, I remember that, over the course of the day, we were given three different food items to sample — apples (for the Big Apple), Chinese food, and a plump kosher dill.

We may be forgiven, then, for not knowing about the rest of the spectrum of pickled foods.

That’s why The Joy of Pickling was created. Its chapters touch every arena of cuisine, from desserty pickles (apples, watermelon) to antipasto (asparagus and mushrooms) to main courses — Korean kimchi and pickled meats, for instance. (The original edition, shockingly to us, left out kosher dill pickles, but this edition corrects that oversight. First published ten years ago, a new, expanded and enhanced edition was released this month.

The book’s instructions are clear and simple. I always thought that pickling was highly scientific — like, that you had to add an exact amount of vinegar and modulate the temperature, or else your taste buds would explode — but it turns out, it’s rather easy. Author Linda Ziedrich exercises due caution, and explains what you have to do, whenever it comes to something complicated and number-y, like the acidity of different vinegars (Ziedrich recommends an acidity of 40-60 grain, or 4-6%). There’s even a helpful section on choosing which vinegar you should use to brine — apple cider for a full, mellow taste (though it will darken the color of the food); red wine vinegar will bring a kick of spice to your pickles, the way that Italian food does.

There are so many things inherently Jewish — and, specifically, Ashkenazic — about pickling. The briny taste that instantly calls to mind cold wintry cabins and warm dinners of meat, beans, and sauerkraut cooked over a fire. The concept of “instant leftovers” that you can use and re-use from the moment you twist them open. That swarthy vinegar taste, so lip-smackingly sour and tart and wonderful at the same time. It makes you recoil at the same time as you’re begging for more.

My wife, who’s a personal chef, has a theory that pickling goes well with the Jewish lifestyle: you can make a huge amount of food, store it away for as long as you want, and pop it out whenever unexpected company shows up or whenever you want to make a meal of leftovers but you don’t have, well, leftovers.

Okay, a disclaimer — not every pickled food in the world is distinctly Jewish. This book makes good reference of that, and does an almost-world tour of Korean, Japanese, German, Eastern European and even Middle Eastern (with “Lebanese pickled eggplant stuffed with garlic”) recipes. It’s not exactly a surprise that the idea of preserving freshly-grown food for the cold or winter months would transcend cultures.

But after this global survey of kraut, kimchi, and miso, the final chapter all brings it back to the Chosen Folks for the rawest and most unapologetically strong-tasting of all pickled foods: meat, fish, and eggs.

About pickled meats, Ziedrich tells us that German Jewish immigrants brought the first recipes to the United States about 160 years ago. It’s not totally gross (although, granted, the pickling process does involve getting pretty hands-on with the raw meat and getting it good and rough with your hands)â€¦and there’s the matter of pickling the meat raw for 10 to 14 days, before it ever comes into contact with heat. But, I suppose, art demands sacrifices, and our modern sensibilities that demand that meat be cooked before it’s eaten is just one way to of detoxify it. In truth, there are several ways to treat meat relatively safely in order to make sure it’s not diseased — it’s just that we’ve come to expect that meat is unsafe by the time we buy it, and therefore, the only way to be totally safe is to grill the hell out of it.

Pickling, on the other hand, has been around for practically as long as humans have been eating. If cucumbers were created on the fourth day of Creation, along with all the rest of the flowers and fruits and plants, then Adam and Eve probably couldn’t have waited too long before brining some vegetables and stuffing them inside some airtight fig-leaves for a few weeks. That’s one of my runaway metaphors, I know — but just one of the stellar things about The Joy of Pickling is that it sternly and steadfastly insists that there is more to pickles than simply a jar of green dill pickles.

In fact, you might say, there’s a whole world. 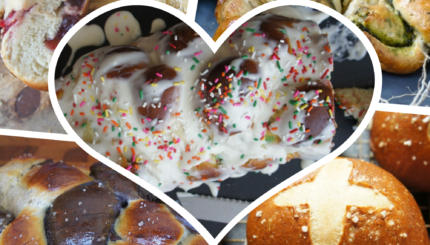 Keep your challah interesting and flavorful year-round with these sweet and savory variations on a Jewish classic.