Teenagers have always been the most challenging of characters, and the most convincing. No book has quite gripped people over the past 30 years like The Catcher in the Rye, primarily because no book has so successfully navigated the boundary of utterly real and utterly larger-than-life the teenage mind is, and teenage problems are. Most contemporary YA literature tries to play it exactly like an MTV reality show, and make everything as normal and cliche as possible. (My own new novel, Candy in Action, went all the way in the other direction, sending a teenage girl straight from college into an action-movie sequence with Matrix-like secret agents and cell phones that can do anything.) 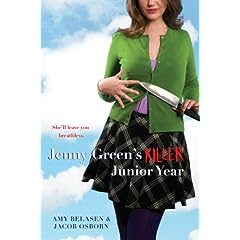 Jenny Green is a paradigmatic case of running against the grain — totally grounded in reality, but totally liable to end up on another planet. The protagonist of Amy Belasen’s novel Jenny Green’s Killer Junior Year (cowritten with Jacob Osborn) is a startlingly normal, well-adjusted and acculturated Jewish teenage girl who gets into cringingly normal teenage-girl situations — boys, dances, excruciatingly embarrassing teenage situations. For her junior year, Jenny wants a fresh start in her life. She starts boarding school far away in Montreal, where nobody’s ever heard of her — except for Josh Beck, her long-time crush.

But — and here I’m going to quote from the book’s jacket, because I don’t know how else to put it — “when she discovers just how despicable the male gender can be — with the lying, the cheating, and the utter disrespect — she decides to make them pay…with their lives.”

Yeah, Jenny Green is anything but an ordinary book.

We got a chance to speak to the charming, funny, and (at least we think) totally un-mass-murderer-like Amy Belasen, herself an alumna of the eminent Canadian academy McGill University, to ask her a few questions about the role of JAPs in Jewish literature, what it’s like to write teenagers, and who she’d most like to murder.

In a lot of recent young-adult fiction, you find a lot of wrangling and murmuring and ducking in order to avoid using the J-word â€“ JAP. You, on the other hand, come out and say it right on page 5. Did you have to fight to get some of the Jewish content in the book kept in?

Interesting way to start an interview, getting right to the Jewish thing. Sort of like Jenny Green, I suppose.

There was a bit of resistance when it came to all of the Jewish content in the novel, but my agent really stood his ground when these issues arose. He was confident that the fact that Jenny was a stereotypical JAP was what made this book so unique. One day early on in the publishing process, the publisher sent a contract that listed the novel as “Jenny’s Killer Junior Year” — removing the “Green” and thus removed the “Jewish,” giving Jenny a more universal appeal. The publisher didn’t put up too much resistance to restore the title back to its original form. Other than that, the only resistance to Jewish content I can recall was simply to make Jewish references clear to all readers by inserting explanations of terms like JAPs, bubbie, and Yom Kippur, into the text.

Did it work the other way â€“ I mean, were your editors or publishers really pushing the Jewish side?

My editor and publisher weren’t really pushing the Jewish side, but my agent seemed to really embrace the Jewish content. My guess is that he’d probably known a “Jenny Green” or two in his own life.

The names, locale, and even the way characters talk all point to marking Jenny and the rest of the cast as, if not Charlton Heston in a Biblical bathrobe, then still pretty seriously Jewish. Itâ€™s especially pointed, considering that stay-away prep schools in North America are solidly WASP territory â€“ in historical terms, at any rate. Was that a conscious choice?

Throwing Jenny into a prep school was an odd choice for me. I wasn’t quite sure how Jenny would fit in (in the original manuscript, Jenny was actually a freshman at McGill University in Montreal, Canada). But my editors at Simon & Schuster had a better idea. He felt that Jenny’s youthful voice and storytelling appealed to a younger, teen audience, as opposed to college aged students. Two weeks and a few chapters later, McGill University became Molson Academy. It may seem unlikely for a JAP to attend boarding school in Montreal, but let’s not forget that Jenny convinces her parents to let her go, they agree, but not before her mother warns, “There won’t be any Jews!”

What was your Judaism like for you growing up â€“ religious, cultural, social? Did you think of yourself in high school as a JAP? Or did you go in the other direction entirely?

I grew up in Voorheesville, NY, a small suburb outside of Albany. While most of the Jewish kids within a thirty mile radius went to Hebrew Academy or Albany High, my parents chose Voorheesville, a “Blue Ribbon School of Excellence”. There were hardly any Jewish kids growing up, so much so that my mother would, year after year, until 6th grade or so, come to my school to give a Hannukkah demonstration to my class. All of the Italian and Irish kids were respectful, but at the time, all I wanted was Christmas! At home, I was raised Jewish in the traditional sense, I learned to love and celebrate the Jewish Holidays and to keep milk away from meat. I learned the hard way that I was predisposed to becoming lactose intolerant by the time I went away to college, a fact I attribute to my Eastern European heritage (thanks, mom!).

My father is an Israeli who moved to the US in the early 80’s and brought along with him a very different set of values from his experiences in the IDF and growing up in Israel. At 13, Bar and Bat Mitzvahs were cool and my family had been a part of Temple Israel in Albany for as long as I could remember. When I began college in Montreal in 2001, my awareness about Jewish identity and Israel grew and grew. I understood for the first time why my parents wanted me to date Jewish guys. There was an easy bond, a sense of shared values and understanding. I signed up for Birthright Israel in 2002. In 2005, I led the same trip through Israel. Although I haven’t been back to Israel since then, my love for Israel remains strong. I currently live in Tucson, AZ and although I haven’t tapped into a Jewish community here yet, I continue to celebrate the holidays with friends and family, and feel proud and happy to be Jewish (even if it means that I’ll never eat another bowl of full strength ice cream again. There’s always TCBY.).

I know how much authors hate this question â€“ and it must seem doubly weird to you, considering your bookâ€™s protagonist â€“ but how much of yourself is Jenny Green? How much of her is fantasy, and how much is â€œOh man, I hope this isnâ€™t meâ€?-ness?

Jenny Green has been described as my alter-ego. I’ve been told, “You are Jenny Green.” I’ve been told, “I hear your voice when I read these pages.” I’ve been asked by boyfriends, “Are you going to kill me in your next book?” While I embrace these similarities, it’s important to understand that Jenny Green is meant to be over-the-top. Jenny Green gets so fed up, she kills her boyfriend (the worst I’ve done is broken a few hearts).

Jenny Green manipulates her parents, friends, and mentors (so I seduced a TA once for an “A”, so what?). Jenny Green goes on week long binges where she eats nothing but her own fingernails and TCBY (and I’ve only done that for two days at a time, so there). I hope I’ve made myself clear.

OK, admittedly, Jennyâ€™s subtext isnâ€™t very â€œsubâ€? at all â€“ guys sometimes walk all over girls. Girls can find a way to get even. What, in your head, is the ideal reaction for a teenager to have to reading your book? What sort of feedback have you gotten? And what, if anything, do you hope to do with your book — what do you want people to gain after reading it?

Any teen girl reading my book should go through a range of emotions. It’s okay not to like Jenny at first, just like a new friend, it takes some time to warm up to her. But when Jenny starts to take a stand, not just for herself but for every woman who has ever been used, cheated on, raped, mistreated, ignored, lied to, I would hope that a teen girl’s reaction would be to imagine herself in Jenny’s shoes and to understand Jenny’s reasons for her actions.

Jenny isn’t killing guys for fun; she’s ridding the world of human garbage. The book is meant to entertain questions like, “What if I could just rid myself of this jerk/loser/boyfriend for good?” Questions I’d asked myself over and over again in college. Jenny explores that “what if,” letting the reader live vicariously through her actions. All of that said, this is also a cautionary tale. Jenny Green lives in a consequential world. There is not and will never be a best friend, a boyfriend, a Jewish Prince Charming for Jenny by the end of the novel. She’s alienated herself from her family, friends, all of the people who know and love her. She cannot fit into society because she is a killer. In the end, she is alone. So the message is clear: don’t be like Jenny, don’t kill your boyfriends, just enjoy the ride–and stop dating jerks!

I know youâ€™ve got some Hollywood stuff going on -â€“ whatâ€™s up with that? And are you working on any new stories?

Well, I’m always pursuing creative things. If it’s not writing, it’s some type of art, painting or photography, or something entirely new. I enrolled in a writing course at a local college to keep my wheels turning. I plan to begin my MFA in Creative Writing at University of Arizona this fall. Someday, I’d love to teach writing, theatre, or art to teenagers. I find a lot of fulfillment in inspiring teens to be creative, trust their instincts, and get involved in some aspect of the arts. It makes for a richer, more colorful life. As for the Hollywood stuff, I’m working with a wonderful agent in LA to hopefully turn the book into a TV show or movie!

I’ve done a handful of book signings in LA and Arizona since the book’s release in September of 2008. As for my next story ideas, there are a few, but I’ve learned that I’m not supposed to give those out! Keep things a little mysterious. So I guess you’ll just have to wait and see!