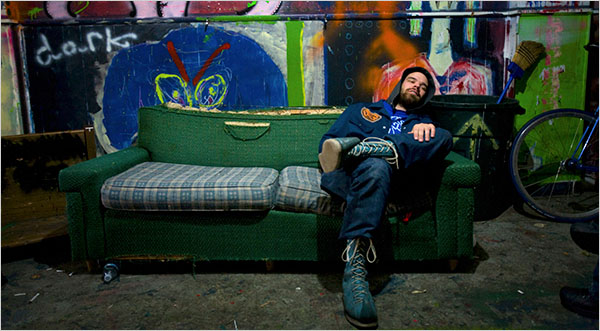 Yesterday the New York Times profiled Michael Muhammad Knight, a Muslim and author of The Taqwacores, a novel about punk-rock Muslims. Both vehemently religious and sometimes vehemently opposed to the official Muslim platform on things — or what’s come to be accepted as the official Muslim platform on things — Knight’s characters are punk band members, co-ed prayer ritual leaders, and a “riot girl [sic] who plays guitar onstage wearing a burqa.” The book started out life as a photocopied manuscript that was passed around between young outlier Muslims, but was soon picked up by Autonomedia and has just been rereleased in a sharp-looking printing by Soft Skull Press. But the Times profile gets both Knight’s message and the author himself in a way that I think the L.A. Times just glossed over, which is to say, there’s a stunning and humbling combination of chutzpah and devekut — that is to say, in-your-face-ness and piety — in Knight’s work that connects with readers in a truly profound way.

The most awesome proof of this, I think, comes from the novel itself. When Knight wrote the book five years ago, he was writing a wish. Taqwacore was his made-up name; there weren’t any Muslim bands playing revolutionary punk music. (And yes, I know I’m being incredibly gushy; my first book, Never Mind the Goldbergs, was about an Orthodox Jewish punk-rock scene that also didn’t exist.) But in the short time since its publication, an entire Taqwacore scene has sprung up.

It seems kind of weird that I’m blogging about this on a Jewish site, I know. But so much of it resonates with my own Judaism — and who among us doesn’t recognize the impetus to both love our religion and despise parts of it? Knight, I think, says it best. It’s easy to link Muhammad’s actions (the prophet, not the author) to Abraham’s riot-boy tantrum that first kicked off monotheism on Earth, but the sentiment of returning our religion to its roots, and separating true Torah from what everyone around you says it is, is a sentiment that we can all relate to:

[Knight] said he wrote “The Taqwacores” to mend the rift between his being an observant Muslim and an angry American youth. He found validation in the life of Muhammad, who instructed people to ignore their leaders, destroy their petty deities and follow only Allah.

How Jews went from protected minority to persona non grata in just a few years.