The Chabad Emissaries of Cool

The Conspiracy of Covering Up

In last Sunday’s New York Times, Paula Roth (no relation) covers the opening of a new bar in an area with a clientele that, well, bridges borders, to say the least:

Crown Heights, Brooklyn, a mash-up of cultures, is home to both the annual West Indian American parade and the headquarters of the Chabad-Lubavitch Hasidim. Adding an upscale bar and beer garden to the mix might seem counterintuitive.

Bar co-owner Matthew Roff (also no relation), who also owns the music venue Southpaw in Park Slope, is following the tide of twentysomething trend-seekers who have migrated from the cozy and posh Park Slope neighborhood — Brooklyn, but lots of subways and pretty convenient to Manhattan — to Prospect Heights, the next neighborhood out (fewer subways, slightly less convenient) and, recently, to Crown Heights (subways suck, and I’m lucky if I make it to Manhattan in an hour). 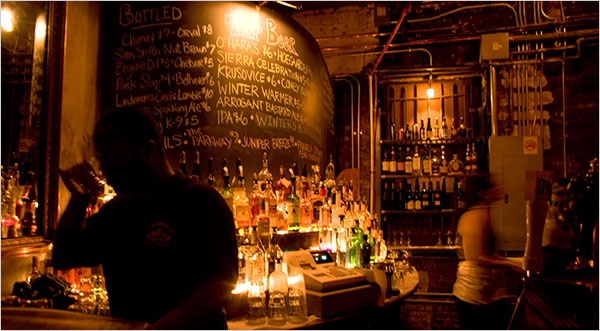 But as we’ve reiterated here several times, Crown Heights is its own little universe — a place with its own issues, where the issues of the rest of the world don’t encroach upon it and don’t even really apply. There were the Crown Heights riots, and more recently a series of beatings that culminated in a 15-year-old Hasidic boy beaten by a gang while going to the corner store to buy baby formula…and, on their own, both the Hasidic and Caribbean communities have their own issues.

All the more reason for Franklin Park to exist — because everyone needs a retreat where they can sip on a microbrew and play some Skee-Ball. And the invading hipsters will probably drive rents through the roof, of course, sending much of the neighborhood’s existing diversity into exile, but they’ll also bring some stability, much-needed economic stability, and, most needed of all, peace and boringness.

Mr. Boyle pondered whether old-timers would dismiss them as invading hipsters.

I’m not a hipster, Ms. Bonnell, a physical therapist, insisted.

Yes, you are, Mr. Boyle said, waving toward her long cardigan, red scarf and chunky boots. He tugged on his subtly sheened blue button-down. So am I.

OK, as promised:This past Saturday night was the first Hasidic poetry slam in Crown Heights, at least in the estimations ...

Remember way back when I wrote about how the New York Times constantly glamorized/fetishized/stared at the world of Hasidic Brooklyn? ...