(Cross-posted at The Jew and the Carrot)
I wrote about this once before, but wanted to return to the topic of the of the Jewish businesses and advertisements in the Williamsburg neighborhood of Brooklyn that were recently defaced:

The motivation behind the incidents is spiritual. Ads featuring highly detailed images of tantalizing foodâ€”and businesses hawking an unnecessarily wide variety of food, such a the now-shuttered Sub on Wheels once parked along a Williamsburg streetâ€”are seen as excessive and indulgent by austerity-minded activists, who are alarmed by what they see as an intrusion of secular, pleasure-oriented values into their community.

In two recent incidents, an enormous building-side banner advertising Grill on Lee, a new gourmet restaurant in the neighborhood’s heart, was sliced halfway, and a Satmar butcher shop with large photographs of dish-laden tables in its windows had those photos cut out.

The issue here is that some businesses are “hawking an unnecessarily wide variety of food” which is apparently a symptom of a larger problem: the “intrusion of secular, pleasure-oriented values into [the Williamsburg] community.”
Initially I wanted to write all of this off as completely ridiculous and move on.Â  In fact, I’m already on the record with what accounts to a snort and an eye roll.

But I’d like to give this issue a little more attention.Â  Part of me honestly wonders if there is there anything to all of this? Are we focusing too much on the gourmet? Are we getting carried away with indulgence and variety, and forgetting something about the essence of food and eating?Â  What do traditional Jewish texts have to say about these kinds of things? I want to preface this discussion with a blanket condemnation of the means these protestors used to disseminate their message.Â  Even if their anger or frustration regarding indulgence and immodesty was warranted, their method of demonstrating this anger and frustration was irresponsible, illegal, and completely non-menschlich.

So now let’s look first at the symptom, and then the disease.Â  Is there an unnecessarily wide variety of kosher food available in Brooklyn?

The answer, of course, is subjective.Â  How much is too much?Â  And also, what counts as variety?Â  Would it be okay to have thirty varieties of kugel, but not okay to have kosher Thai or Mexican food?

I’m doing some research on the organic food movement in Hasidic Brooklyn, and I hope to post about that soon, but in the meantime, let’s look and see what some traditional Jewish texts say about variety and food.

The obvious first text to look at concerns the manna that the Israelites received every day in the dessert.Â  Though they had with them livestock, and thus access to both milk and meat, in addition to some oil, and flour, manna was the main food consumed in the wilderness.Â  This seems to be an argument in favor of our vigilantes in Brooklyn.Â  No variety whatsoever, and it came directly from God.Â  If God gave us one foodstuff, then that’s a good model of how we should eat, no?Â  But the classical commentaries are not content to leave manna as a neutral homogenous food.Â  Instead, commentators go to great lengths to extol the diverse nature of manna.Â  It could taste like food for adults, or mother’s milk for an infant.Â  One could change how it tasted according to one’s wishes.Â  Though it arrived at once for everyone, it was a highly specialized food.Â  So perhaps manna is not a great model for our food lives. 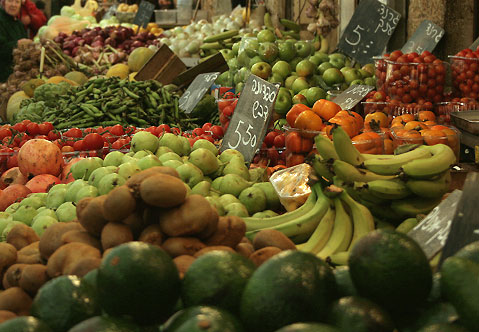 The Bible mentions a great array of foods, from cakes and calves (Gen 18:6) to fish (Ex 11:15) to stew (Gen 25:29) to cheese (Sam I 17:18).Â  We are told about the seven fruits, and the land of milk and honey.Â  There is simply no indication that God wants us to reign in the number of recipes we have in our kitchens. I can find no basis for that part of the Williamsburg complaint.

But I’m still working over the larger problem ofÂ  the “intrusion of secular, pleasure-oriented values into [the Williamsburg] community.”

I believe food can and should be pleasurable.Â  I like my meals to taste good, and if they look good, that’s also wonderful, though somewhat less important to me.Â  I know that I could get most of the nutrition I need from very simple foods, or even from vitamin pills, but good food is important to me, and not something I plan to give up anytime soon.Â  This is not a novel concept.

Food is also a means to an end for me.Â  It brings my friends to my table, and my sisters to my kitchen.Â  It’s a way to demonstrate support and love in a difficult time, and to sustain travelers.Â  Food is very often a vehicle for performing mitzvot, whether it is feeding the hungry, eating first fruits, sending food baskets to friends on Purim, or munching matzah and giving Maot Chitim on Passover.Â  Even if I do the bare minimum of holiday observance, there’s a lot of food involved, and if I’m going to be making a Purim feast, or a Passover seder wouldn’t it be hidur mitzvah, or glorifying the mitzvah to make the meal as tasty and sumptuous as possible?Â  And if eating is often a mitzvah shouldn’t I be doing so zealously and with great intention in order to best fulfill my obligation?Â  I’m not sure where the fine line is between hiddur mitzvah, and ‘pleasure-oriented values.’Â  How can we ever distinguish between people who are making good food in order to do a mitzvah with great enthusiasm, and people who are making good food because they’re gourmands and they like to be over the top?

As I was thinking about this, I remembered an old Hasidic story that was included in an essay I love by Ben Birnbaum.Â  The essay is about prayer, but the story focuses on the connection between eating and praying.Â  Essentially it asserts that eating can be a form of praying, and in fact that a good eater can be an phenomenal teacher ofÂ  prayer.Â  I recommend you read the entire essay (it’s free over at Image) but here’s the key passage:

â€œLearned rabbi,â€? Naftali then said, â€œso you donâ€™t go away thinking the worst of me, allow me to tell you a story. All my life Iâ€™ve had a great appetite for food, and that has been a blessing, giving me the strength to earn my living. And then one day a few years ago, I was alone in the forest when bandits attacked me. They were going to take my wagon and tools and kill me. And so I prayed to our Creator, saying, â€˜I have no learning, I have no pious habitsâ€”all I have is an appetite. But if You give me the strength I need today, for the rest of my life when I eat on Your holy Sabbath, I will eat for You, only for You.â€™â€?
The rebbe returned to his own village. He lived many more years. And when people told him how impressive and uplifting his prayers were, he was sometimes heard to reply, â€œWhatever I know about prayer is as dust compared to the knowledge of my master, Rav Naftali of Berzhitz.â€?

This is, I think, a really beautiful way to look at both eating, and how we can do it with Divine intentions.Â  It can and should be pleasurable, but it should also be something that we do, in no small part, for God.

So food can bring us closer to God, and to our community, but it can also be incredibly divisive.Â  If you’ve ever seen someone be interrogated about their kashrut standards before a guest sits down at a Shabbat table, or if you’ve seen a mother whose child will no longer eat food from her kitchen because it’s not kosher enough, you know that food in Judaism can be something that tears us apart.

The Talmud says about food given to those on a journey, “It alienates those who are near, and draws near those who are distant; it causes [God’s] eyes to be averted from the wicked, and made the Shechinah to rest even on the prophets of Baal; and an unwitting offence in connection therewith is accounted as deliberate” (Sanhedrin 103b)

What does this mean?Â  Food can be alienating, it can make us nostalgic, it can bring holiness to things that are not holy, and when we screw up the mitzvot having to do with bringing food to those on a journey, we’re culpable for our mistakes, even though they were accidental.Â  Food is a serious thing.Â  We need to take it seriously.

When we eat we can and should enjoy our food.Â  This is something that has always been celebrated by Judaism.Â  But it needs to go deeper than that.Â  If the food is just about taste, if it’s just a matter of putting something yummy in our mouths, then we have, in some small way, succumbed to the culture of “secular, pleasure-oriented values.”Â  Food should be something that anchors us in communities, tethers us to God, and keeps us aware, always, of the land we live on, and the relationship between our body, and what goes into it.Â  Just as we encourage people who are in committed loving relationships to enjoy intimacy, so too should we encourage those who see eating as a way to connect with the Divine to make delicious meals and enjoy them.

If there are people in Brooklyn who are worried about food that is too good corrupting people’s thoughts the solution isn’t less food, or food that’s not very good.Â  The solution is a spiritual journey that begins in a garden, and ends in a kitchen.