Receiving the Torah Was a Home Run

Don’t Compare Yourself to the Gestapo

Do you ever notice how, for a paper with so much anti-Israel tactics, the New York Times sure reports a lot about Jews? 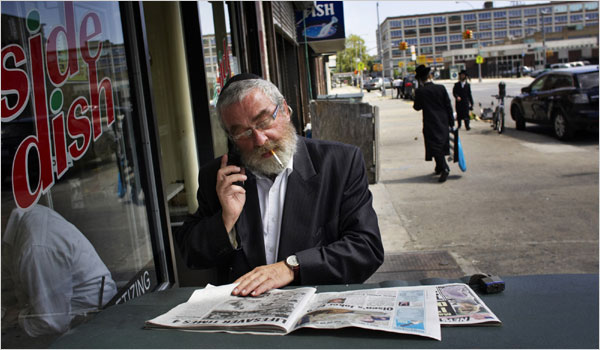 Then again, maybe it’s all a Jewish anti-Zionist plot. Williamsburg, Brooklyn “fixer” Isaac Abraham — a hardware store manager, tenants’ rights activist (and not just for Jews, either) was the focus of an article this week about how he’s running for city council. The Times says he’s not exactly running for a “a new role…perhaps just a more formal version of what he has done for decades.” Even though there’s the requisite controversy–this time, over remarks made with kooky Congressional front-runner (and ex-Real World cast member) Kevin Powell — the reporter paints a pretty flattering portrait, all told.

The fourth issue of Guilt & Pleasure is now out, and at first glance, it seems as good (and good-looking) ...

Jewcy is rallying the troops for a boycott of Abe Foxman’s speech at the 92nd Street Y next week to ...

A couple of weeks back, we (the Jewish community) were up in arms when Rich Sanchez claimed, like so many ...