Thick and slightly sweet, with cheek-puckering tartness, pomegranate molasses is a staple ingredient in Middle Eastern cuisine, where it was likely developed as a way to preserve a bumper crop of pomegranates. Pomegranate molasses plays a starring role in many Sephardic dishes, including fesenjan, a Persian chicken stew; muhammara, a red pepper spread from Syria; and batinjan bil rumman, a classic pairing of eggplant and pomegranate from Lebanon. In Israeli cuisine, pomegranate molasses lends zing to Israeli salads and balances the sweetness of the rosewater pudding, malabi.

Pomegranates, one of the Seven Species of Israel (along with wheat, barley, grapes, figs, olives and dates), have been a part of Jewish culture for thousands of years. They appear in countless Jewish stories and songs, on Judean coins and temples, and adorn Torah scrolls. The thick-skinned, seed-filled fruit, which is technically a berry, is a common sight on tables at Rosh Hashanah, when, on the second night, it’s typically consumed as a ‘new fruit.’ The many arils, or seeds, of the pomegranate are said to represent the 613 mitzvot, and a common Rosh Hashanah blessing dating back to the 14th century exclaims, “May our blessings proliferate like the [seeds of the] pomegranate.”

Technically speaking, pomegranate molasses isn’t molasses at all. The lip-smacking syrup is nothing more than a simple reduction, which means it’s something you can (and should) whip up in your own kitchen. While some recipes call for adding lemon juice or sugar — both of which act as flavor enhancers and preservatives — to pomegranate juice, all you really need for a tangy pomegranate molasses is juice and time.

I find that making my own allows me to control the flavor and vibrancy of the final product. I start by bringing a 32 oz bottle of RW Knudsen (or any brand without additional sweeteners, including Pom) pomegranate juice to a simmer and holding it there for about an hour until it coats the back of a spoon. (But keep an eye on it because if it goes too far, you’ll lose the essential anthocyanins — the pigment that gives pomegranates their bright pink flavor and astringent taste.)

It takes about six to eight pomegranates to get 32 ounces of juice, which yields just under a cup of pomegranate molasses. Unlike fresh pomegranates, which last about two weeks on the counter, your molasses will store in the fridge for months.

If you’re short on time, I’ve never had much trouble scoring the crimson syrup from international grocers, grocery stores or the internet. Cortas is a reliable brand with a deep rust-colored syrup that has a pleasant balance of sweetness and tartness. For an organic alternative, try Just Pomegranate Organic Syrup, which leans toward the tart side.

There are a myriad of ways to  put this magical ingredient to good use. Swirl it into simple vinaigrettes and cocktails, use it to deliver a punch to bottled barbecue sauce, or, better yet, drizzle the stuff over vanilla ice cream, and then sprinkle on a handful of toasted, chopped pistachios for a ridiculously easy yet impressive dessert.

Few condiments can stand up to big, meaty flavors quite like pomegranate molasses, which balances the savory richness of a honking lamb shoulder, as in this recipe from Michael Solomonov. Or combine it with brown sugar to lend a little sweetness to a Rosh Hashanah chicken. 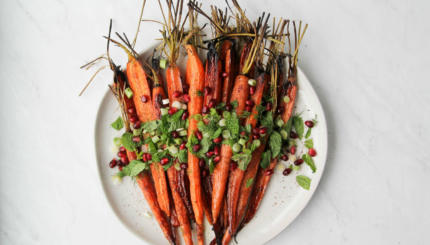 An easy yet impressive side dish for anytime. 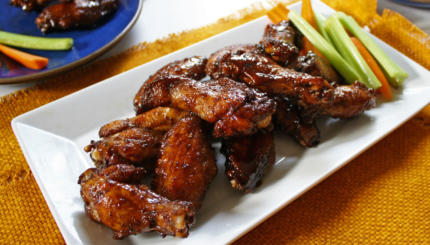 These Middle Eastern spiced wings will be your new party favorite.

Some of the best ideas are made on the fly, and this recipe was one of those. While perusing my ...