Why Prune Hamantaschen Are the Best

Today we think of hamantaschen, the triangle-shaped stuffed cookie, as the pastry of the Jewish holiday of Purim. But the original hamantaschen had no Jewish connection at all. According to Gil Marks in his landmark book, “Encyclopedia of Jewish Food,” the hamantaschen we eat on Purim — and increasingly throughout the year as American bakeries and bakers have embraced them as an evergreen option — are based on a medieval German pastry stuffed with poppy seeds. It was called mohntasche, from the German words for poppy seed (mohn) and pocket (tasche).

By coincidence, mohn sounds like Haman (Hamohn in Hebrew), the supervillain of the Purim story who plotted to annihilate the Jews of Persia. German Jews, wrote Marks, “renamed this Teutonic cookie as hamantasch ..meaning ‘Haman’s pocket.’” It was common, in Jewish communities all around the world, to prepare foods for Purim that somehow alluded to Haman, his body, the clothes he wore, or to other characters in the Purim story. In eating those pastries, wrote Marks, a person “symbolically erases Haman’s name.”

Following the Black Plague in the 14th century, many German Jews fled their homes and migrated eastward, bringing their poppy seed stuffed pastries with them.

Shmil Holland, a restaurateur, expert on Eastern European Jewish food, and author of the cookbook, “Schmaltz,” says that over time, this “haman’s pocket” cookie became associated with Purim in Eastern Europe, and poppy seed became the “ultimate Purim filling.” But other fillings gained popularity, too.

The choices were limited, of course, by the time of year and what was available in the markets and the cellars of Eastern Europe. Since Purim falls at the end of winter, the abundant fresh fruits and berries, like cherries, strawberries and raspberries found in the woods and orchards of that region in the warm weather were not an option. Winter fare such as dried fruits, nuts, poppy seeds, honey or kasha (buckwheat) was.

In Poland, says Holland, hamantaschen were sometimes stuffed with “dried pears that were soaked in water or alcohol, then chopped and mixed with walnuts.” Jews in Bukovina (an area that is divided today between Ukraine and Romania), Serbia and Moldova filled their holiday cookies with a walnut paste combined with honey.

Following a Purim-like story of their own, the Jews in Bohemia and Czechoslovakia (today’s Czech Republic and Slovakia) embraced a special hamantaschen filling called povidl (known as lekvar in the United States) which is a thick spread made from slow cooking the dark purple Damson plums that are harvested in Eastern Europe at the very end of summer. After the fruit and its peel are cooked for 48 hours on a low flame, said Holland, they become a sweet paste. It lasts for months when kept cool in the basement, and it was used in kugels, strudels, cakes and blintzes in central and Eastern Europe. Those same plums are used, too, to make slivovitz, the fiery, high proof plum brandy.

According to Holland, about 300 years ago a Jewish shopkeeper named David Brandeis was accused of selling poisoned povidl to a Christian family. After eating Brandeis’ povidl, the Christian customers fell ill — one of them died —and Brandeis and his caramel-like confection were blamed. Brandeis was imprisoned.

An investigation uncovered, however, that the person who died met his end from the flu, and not from anything purchased from Brandeis. So, just as the Jews in Persia were saved from Haman’s evil plot at the last moment, so, too, were David Brandeis and the Bohemian Jewish community in Brandeis’ town. As fate would have it, Brandeis was released from jail four days before Purim. To commemorate that miracle, the Jews of that region forever after filled their hamantaschen with the thick, sweet plum spread.

While most Purim baked goods are sweet, symbolic of a sweet future, there were savory options, too. In Poland, said Holland, kasha (buckwheat, in English), a widely available grain, was prepared with fried onions, seasoned with salt and black pepper, stuffed into the triangle-shaped pastry, and then topped with whole poppy seeds.

In Israel today, stores begin filling up with this Eastern European pastry weeks before Purim. You can still get the classic poppy seed filling, but the choices today spread across the culinary spectrum. “Every year,” said Holland, “fillings get more creative. You can get hamantaschen filled with pastry cream and chocolate.” Of course here in the United States we also have an expansive list of flavors that become part of the always-changing Jewish food landscape. It all started with one humble poppy seed pastry. 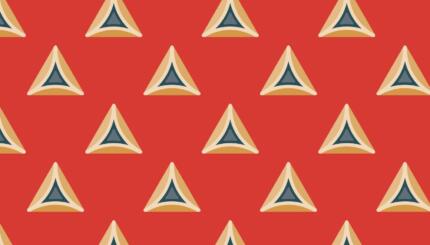 In an age when hamantaschen come in every flavor, I'll take simple and classic any day. 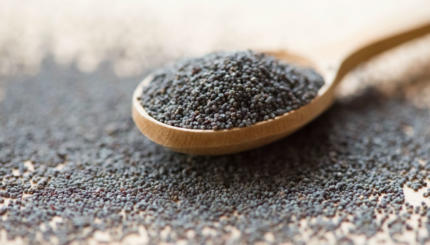 Poppy seeds are a popular flavor for Purim - but why??