11 Rosh Hashanah Appetizers That Are Easy and Delicious

Ah, Rosh Hashanah. The holiday in which we’re not only allowed to eat leavened bread, but are encouraged to slather honey over fat slices of the stuff. As my sister and I used to shout from the backseat of our car on our way to Rosh Hashanah dinner as kids—challah! (see definition #2.) Much as I love the pillowy bread, I’m not going to wax on about the wonders of challah. A slightly quicker, crisper gluten-based treat has my heart this new year: Fenugreek frybread.

When is Rosh Hashanah 2017? Click here to find out!

While fenugreek is more commonly found in curries, chutneys, and spice mixtures in Middle Eastern and South Asian dishes, the fragrant herb is also a symbolic (albeit now mostly forgotten) Rosh Hashanah food. Mentioned in the Talmud by another name — “rubia,” to multiply — fenugreek represents greater blessings in the new year. Fenugreek seeds and leaves are edible; the former lending themselves best in salsas, where they gel and expand (think: chia seeds). The leaves are more akin to dried herbs, with a scent similar to fennel seed. 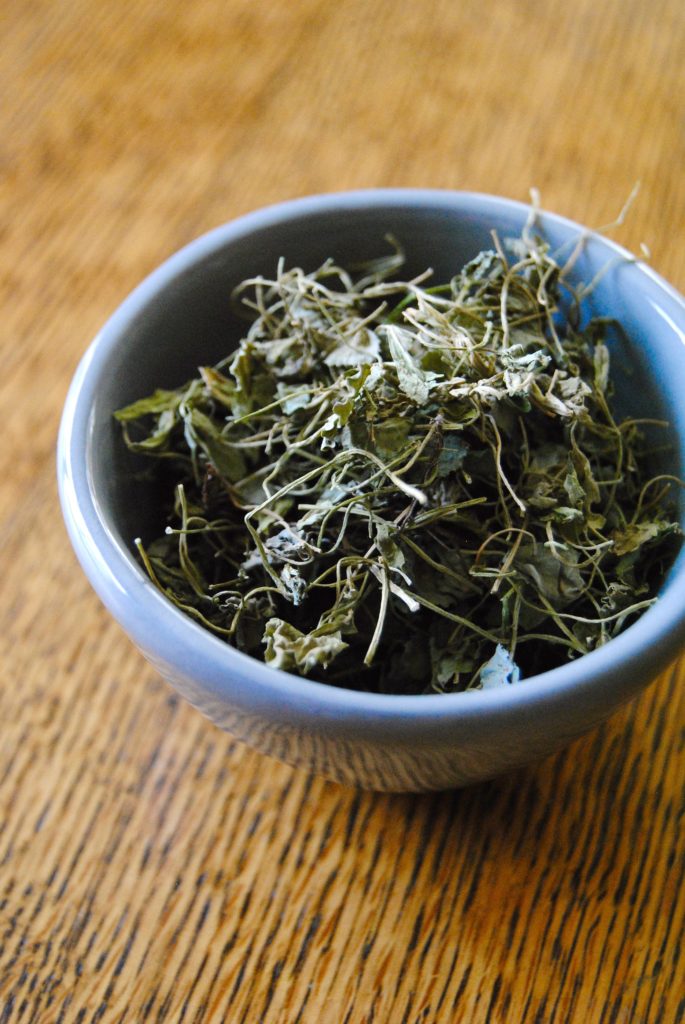 A traditional Native American dish, frybread is quite literally what its name suggests. The simple ingredients (flour, water, baking soda, salt) are typically fried in lard or oil and served with an assortment of shmears. Similar to the North African-Jewish post-Passover mufleta, frybread’s mild flavor increases in complexity with the addition of dried fenugreek leaves.

In this recipe, the aromatic spice cuts through each bite of the rich frybread, making each piece that much easier to devour. I fried in peanut oil, (after several years of canola-frying latkes and smelling as such for the next week, I’ve changed my ways) though non-hydrogenated vegetable shortening yields a clean, crisp fry as well. 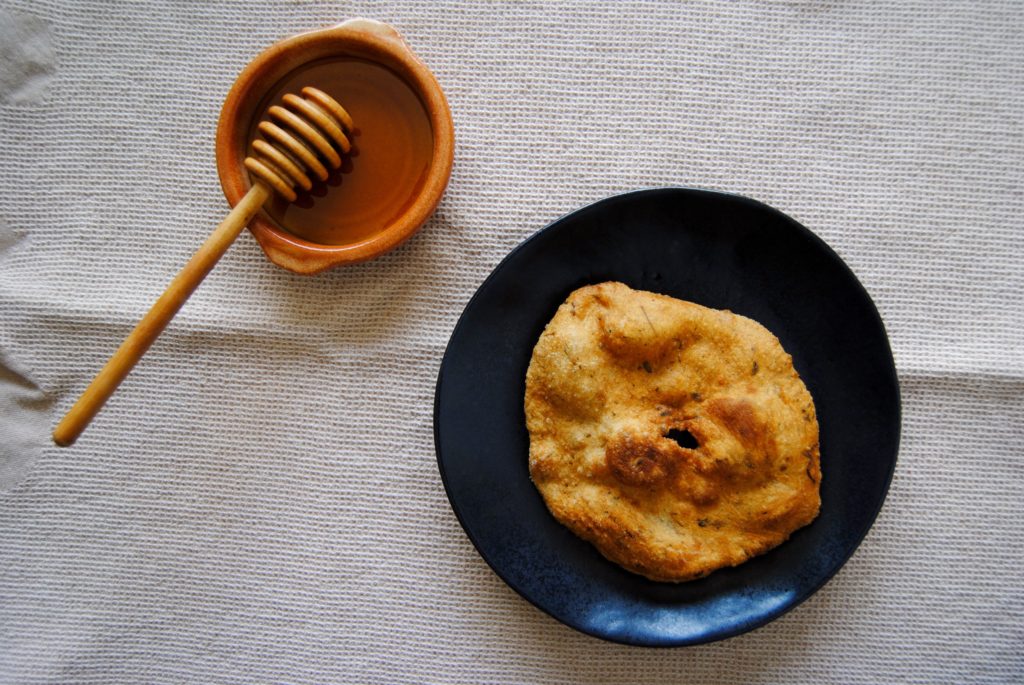 Whisk together flours, baking powder, salt, fenugreek leaves, and sumac (if using) in a large bowl.

Pour in the water and knead until just coming together. Don’t over-knead—this will make the finished breads tough.

Pinch off golf ball-sized pieces of dough and roll into uniform spheres (see above). Use a rolling pin to flatten the balls to 1/4-inch thickness. Poke a small hole in the center of each disk with a paring knife to ensure even frying.

Line a baking sheet with paper towels and set near your stove. Heat 1/2-1 inch of oil or shortening in a large, deep skillet. The oil heat should hover around 350°F—if you don’t have a thermometer you can test the heat by poking the end of a wooden spoon into the oil. If the wood starts to bubble, the oil is ready. 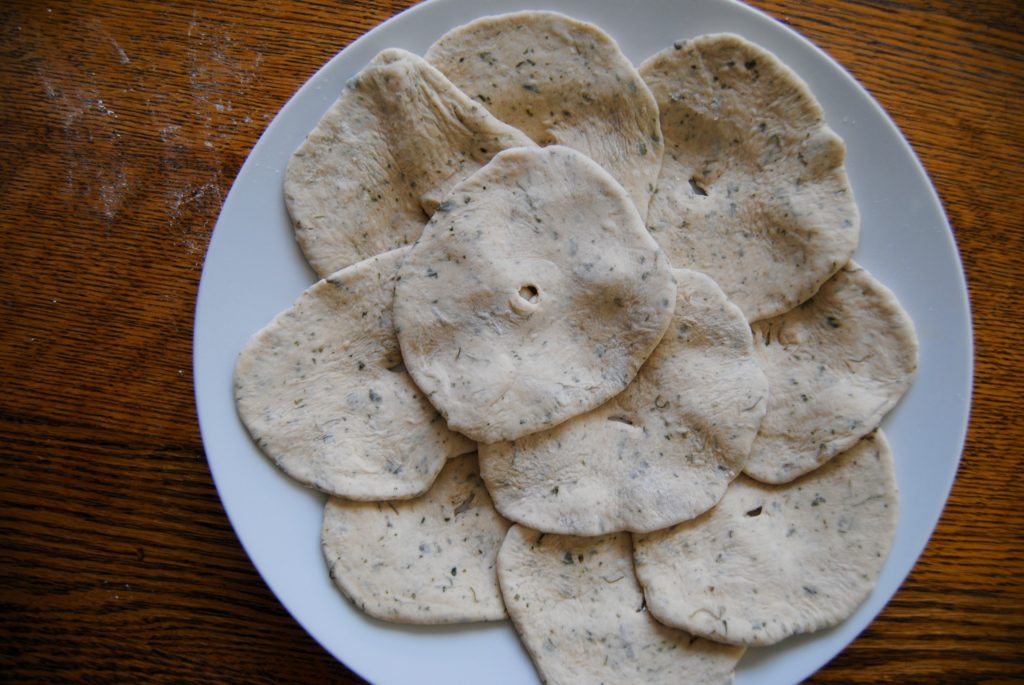 Place the dough disks into the oil (one or two at a time, depending on the size of the pan). Fry each side of the bread until golden, about one minute per side. Remove frybread from the hot oil with tongs, and place on the paper towels to absorb excess oil. 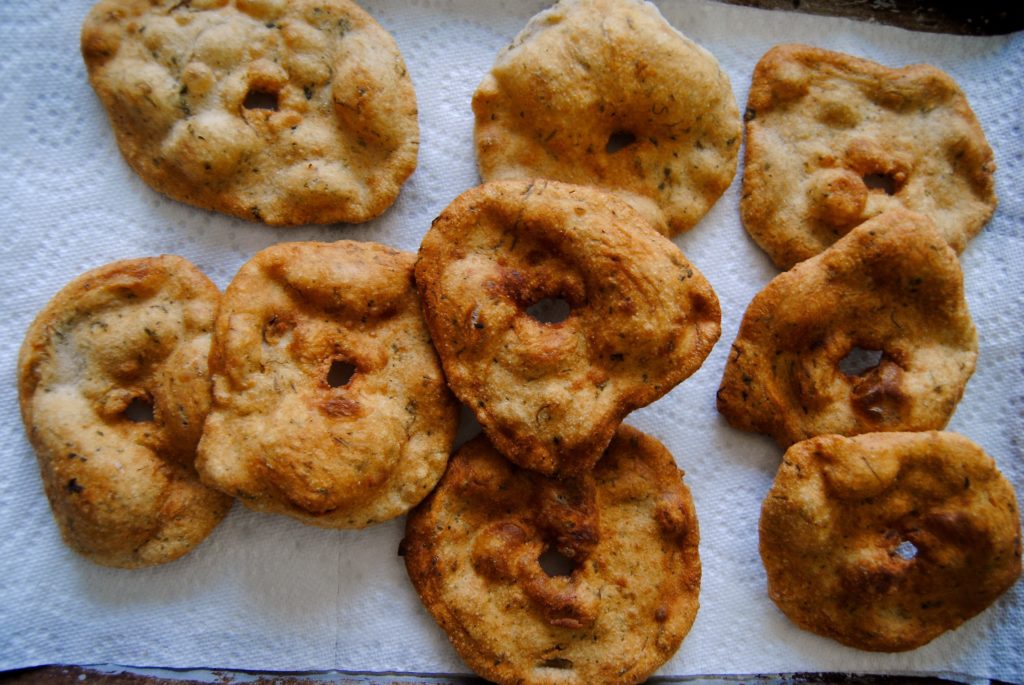 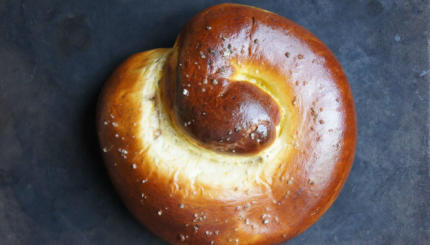 When you break into the round loaf, it is like biting into a challah cinnamon bun. 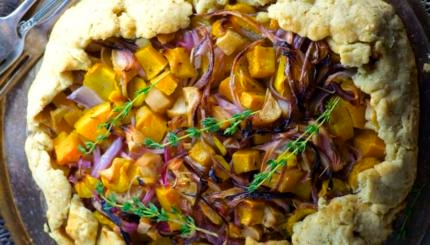 A beautiful and tasty dish that is perfect for vegetarians and vegans. 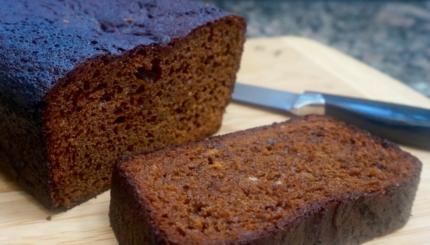 Date honey, called silan throughout the Middle East, changes everything.