If you had walked into Washington D.C.’s L’Enfant Plaza on the morning of January 12, 2007, you would have been in for quite a treat – and you probably never would have even realized it.

That morning, Joshua Bell, who is one of the world’s most accomplished violinists and who had played to a sold-out crowd at Boston’s Symphony Hall three days earlier, used his three-million-dollar Stradivarius to play a 43-minute concert right in the entryway of L’Enfant Plaza’s Metro Station. But instead of being dressed up in a tuxedo, he was wearing a baseball cap and jeans, looking like any other street musician.

He was playing there because columnist Gene Weingarten had wondered: if people had hundreds of things on their minds – getting to work, their kid’s science project, whatever it might be – would people even be aware that they were in the presence of something special?

The short answer? No. The mother of a three-year-old “had a time crunch. She had an eight-thirty training class, and first…had to rush [her son] off to his teacher, then rush back to work, then to the training facility….”, so she didn’t hear anything out of the ordinary (Weingarten, The Fiddler in the Subway, 351). A man in line to buy lotto tickets “didn’t think [anything] of it – [he was] just a guy trying to make a couple of bucks.” The Metro Station was quite busy that morning, and so during the concert, almost 1100 people could have heard Joshua Bell’s virtuoso performance. And nearly every single person missed it.

Afterwards, when Weingarten wrote his article about what had happened, he asked this question:

If we can’t take the time out of our lives to stay a moment and listen to one of the best musicians on Earth play some of the best music ever written; if the surge of modern life so overpowers us that we are deaf and blind to something like that – then what else are we missing? (357)

How likely are we to become blind to the myriad opportunities for experiencing beauty, for developing connections, and for creating meaning because our minds are simply somewhere else?

That’s why preparing for the High Holy Days can give us a framework for us to focus ourselves back to our truest priorities. In many ways, Rosh Hashanah and Yom Kippur act as microcosms of the beginning and the end of our life. Rosh Hashanah reminds us of the possibility of starting anew, of rebirth, while Yom Kippur is a day that reminds us that someday we all will die. (That’s why, by the way, on Yom Kippur we don’t eat or drink, and traditionally wear a kittel, a plain white shroud that will be worn at our funeral.)

When is Rosh Hashanah 2016? Click here to find out!

And while it certainly can be scary to be confronted so starkly with our own mortality, that knowledge can impel us to decide how we want to act in life. Indeed, on both Rosh Hashanah and on Yom Kippur, we read U’Netaneh Tokef, the prayer that reminds us that only God truly knows whether or not we will live to see 5778. And both days are “full of dread,” because God “opens the book of our days, and what is written there proclaims itself.” (translation from Gates of Repentance).

That thought is what is so powerful about the High Holy Days. We can always explain, rationalize or justify our behavior – both to others, and to ourselves – but ultimately, what we do proclaims itself. We begin to realize that the choices we make today will become our legacy tomorrow.

The High Holy Days remind us that while we don’t necessarily have total control over our time – there are many demands on it – we do have control over determining what we feel is most important. In the words of business author Stephen Covey, “the main thing is to keep the main thing the main thing.” (First Things First, 75) He shares this story:

I attended a seminar once where the instructor was lecturing on time. At one point, he said, “Okay, it’s time for a quiz.” He reached under the table and pulled out a wide-mouth gallon jar. He set it on the table next to a platter with some fist-sized rocks on it. “How many of these rocks do you think we can get in the jar?” he asked.

After we made our guess, he said, “Okay. Let’s find out.” He set one rock in the jar…then another…then another. I don’t remember how many he got in, but he got the jar full. Then he asked, “Is the jar full?”

Everybody looked at the rocks and said, “Yes.”

Then he said, “Ahh.” He reached under the table and pulled out a bucket of gravel. Then he dumped some gravel in and shook the jar and the gravel went in all the little spaces left by the big rocks. Then he grinned and said once more, “Is the jar full?”

By this time we were on to him. “Probably not,” we said.

“Good!” he replied. And he reached under the table and brought out a bucket of sand. He started dumping the sand in and it went in all the little spaces left by the rocks and the gravel. Once more he looked at us and said, “Is the jar full?”

He said, “Good!” and he grabbed a pitcher of water and began to pour it in. He got something like a quart of water in that jar. Then he said, “Well, what’s the point?”

Somebody said, “Well, there are gaps, and if you really work at it, you can always fit more into your life.”

Our lives are busy. That’s no surprise. But are we busy with the things that truly matter most? Have we consciously made our highest priorities the “big rocks”?

Like the commuters at L’Enfant Plaza, there are far too many moments when – even though it’s unintentional – we lose our connection to the person we truly wish to be, and instead get swept up in the “thick of thin things.” So as we prepare for 5777, let’s remember: the main thing is to keep the main thing the main thing. And if we do that, we won’t miss the beauty and wonder that surround us each and every day.

Here's how the shofar sounds were interpreted in a classic text more than 1,000 years ago. 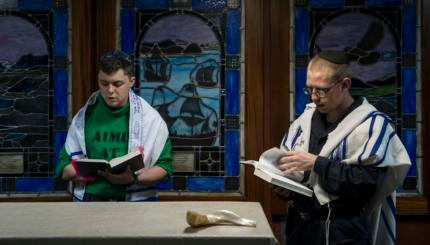 The life and death imagery of Rosh Hashanah is meant to spur people to improve their behavior.