Yesterday, I attended a session with Rabbi Chuck Simon, the Executive Director of the Federation of Jewish Men’s Clubs, a group affiliated with the Conservative Movement.

This was my main criticism I posed at the session.Â  In the end of the day, the movement is basically humoring their intermarried families.Â  Sure, they come to shul and can be members of the board, etc.Â  But in the end of the day, not only will the rabbi not officiate at an intermarriage wedding, but he isn’t even allowed to attend the ceremony!

Now, I’m not making any judgement as to which way the movement should go.Â  But it just seems that the movement is trying to cope with a 2008 issue with policies from the 1980s. The issues concerning intermarriage twenty years ago are very different than they are today and the movement really needs to catch up in order to be relevant in intermarried people’s lives.

When Dad is Jewish and Mom is not, are the kids Jewish? Depends on who you ask. 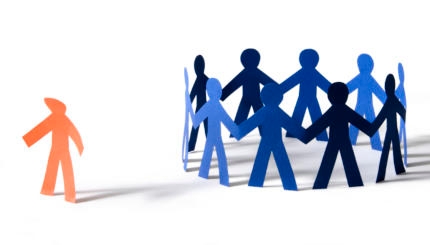 How to Deal With Negative Attitudes About Converts

Despite a Jewish tradition of welcoming converts, Jews-by-choice may experience inappropriate attitudes that they should both understand and, if necessary, confront.